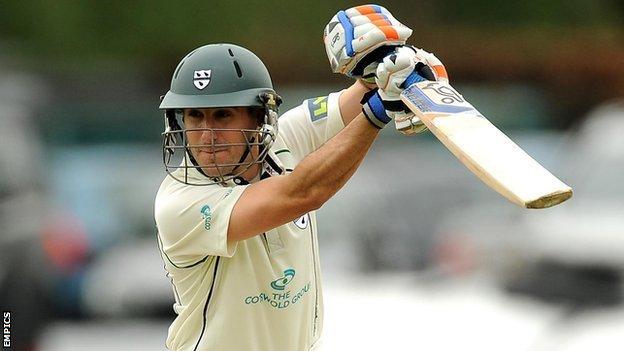 Worcestershire captain Daryl Mitchell started the season in good form with 74 to help his side post a healthy total against Lancashire at Old Trafford.

Starting day two on 227-6, Mitchell, batting down the order at seven after an untimely first-day stomach bug, had good support from Gareth Andrew (52).

But, after a lengthy rain break in the middle of the day, Lancashire's bowlers returned refreshed.

Glen Chapple made the big breakthrough, having the half-fit Mitchell caught behind to end his 96-run stand with Andrew.

That was the first of two wickets for the Lancashire captain, while Luke Procter also took two wickets to finish with 4-58.

But it was a good effort from the visitors, who topped 300 in an innings just twice last season - a major cause of their relegation to Division Two.

"Paul Horton and Luke Procter got Lancashire to stumps without too many concerns, a fine effort under the floodlights, without which we would have gone off for bad light long beforehand.

"Earlier, Procter and Glen Chapple rattled through the Worcestershire tail after a lengthy break for rain.

"The start of the Lancashire innings was actually delayed due to a fire alarm in the new media centre.

"It turned out to be a false alarm - unknown to the PA announcer and scorers, who were seen urging the press to leave the building. Some light relief on a slow scoring day."

"Difficult to see where this one is going, after a slow scoring rate, losing the whole of one session to rain, a not great weather forecast and a slow pitch.

"Full credit to skipper Daryl Mitchell, who was still not totally fit after a stomach bug but battled away.

"And Gareth Andrew again proved that he is one of the better number eights in the country. Some say he should be going in higher.

"The Lancashire openers were not too troubled, although Andrew with the ball might be able to do what Proctor did for the home side."