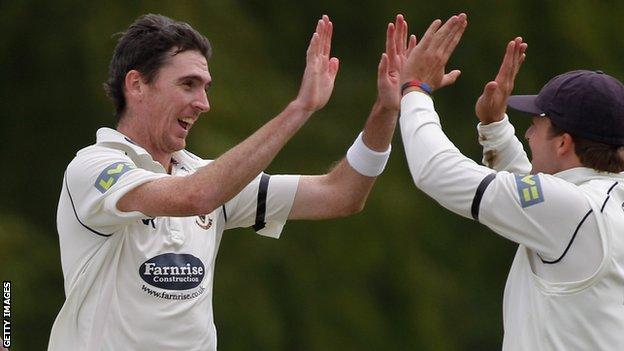 Yorkshire partially redeemed themselves for a feeble opening-day batting display as they fought to avoid an innings defeat by Sussex at Headingley.

Play was unable to start until after lunch, but the home side tottered to 140-7 despite 57 by Phil Jaques.

Prolonged bad weather on the final day could see the home side escape with a draw, but that would be rough on Sussex, whose seam attack again proved hard to handle in the afternoon session.

Resuming on 27-1, Jaques and Adam Lyth looked relatively comfortable before the latter, on 25, tickled a leg-side ball from James Anyon to wicket-keeper Ben Brown.

Skipper Andrew Gale followed in the same over and Chris Jordan, who took six wickets in Yorkshire's first innings, then picked up the vital wicket of England's Jonny Bairstow, bowled by a full-length delivery for 13.

Magoffin removed Jaques and Azeem Rafiq with successive deliveries and then bowled Liam Plunkett, who played down the wrong line, before Ballance and Sidebottom dug in to defy the visitors for 29 overs.

Sidebottom struck a six and four boundaries, but missed out on a half-century when he was caught by Jordan at first slip to give Anyon a third success.