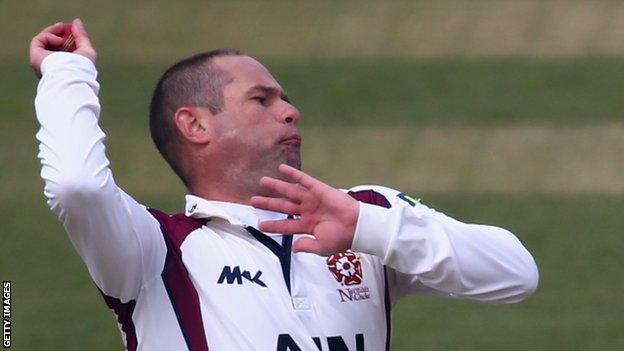 Northamptonshire took control of their match with Glamorgan, reducing the hosts to 96-4 at the end of day three.

Resuming their first innings on 145-5 after a Northants were eventually bowled out for 292 - a lead of 158.

Left-armer Graham Wagg (3-78) polished off the tail, with James Middlebrook (70) the last wicket to fall.

The Welsh side still trail by 62, and with more poor weather expected on Saturday, the visitors will be desperate for quick wickets at the start of day four.

Much will depend on experienced batsman Murray Goodwin, who faced 41 balls in the final hour for his three not out.

"Committed resistance in the last 11 overs from Jim Allenby and Murray Goodwin saw Glamorgan to the close, but only rain will stop Northants from claiming a first Championship win.

"James Middlebrook shepherded Northants' lower order after good work from Andrew Hall and David Murphy, while the seam attack again bowled tightly on a pitch losing its spite to the batsmen.

"Discipline and penetration will need to be maintained on the final day if - and it is a big if, looking at the forecast - the elements allow Northants to complete a job they failed to do at key points in 2012."