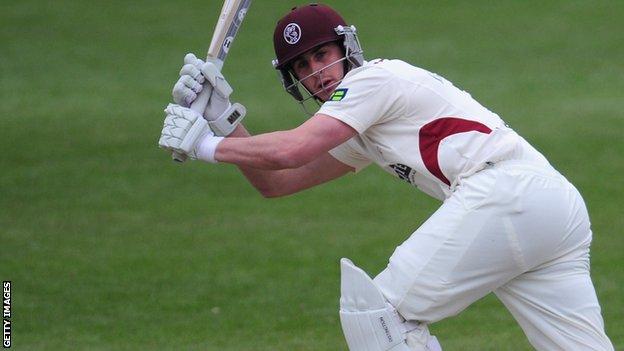 Craig Kieswetter's 39 not out gave Somerset a platform for victory over Durham on a weather-affected third day.

The hosts resumed on 92-8 but Phil Mustard was run out for 25 and Alfonso Thomas (4-29) removed Chris Rushworth as they were all out for 116 to leave the visitors needing 235 for victory.

But Kieswetter stood firm before bad light closed in, with the visitors on 96-2, needing another 139 for victory.

A combination of bad light and rain delayed the start, with the players taking an early lunch before eventually getting underway at 13:40 BST.

From the fourth ball, Mustard was run out by Jamie Overton and the final wicket of Rushworth fell just six overs later.

Given the flurry of wickets in the previous two days, the victory target of 235 looked a daunting one, especially when Graham Onions trapped Suppiah in front in the sixth over.

Kieswetter joined Trescothick at the crease and the pair settled a few Somerset nerves before the latter was clean bowled by Ben Stokes, bringing in James Hildreth ahead of a finely-poised last day.

"Somerset battled hard in gloomy weather on a seaming pitch.

"Marcus Trescothick sold his wicket dearly and Craig Kieswetter is going as well as any batsman is ever likely to on this track, with 39 not out.

"But batting is still a precarious business against the relentless probing of Graham Onions, Chris Rushworth and Callum Thorp. This could go either way - weather permitting."