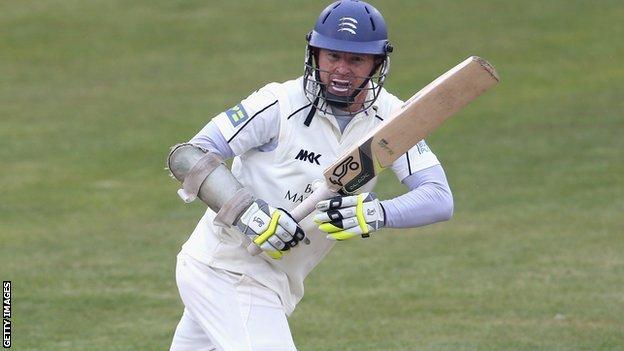 Chris Rogers and Sam Robson both hit half centuries to help Middlesex to a 10-wicket win over Nottinghamshire.

Notts resumed on 182-9, a lead of 107, but had Andre Adams caught by a diving Ollie Rayner at second slip off Toby Roland-Jones from the day's first ball.

Robson and Rogers both survived confident appeals for caught behind as Notts sought an early breakthrough.

Middlesex could have hardly dreamed of a better start than when Adams, 50 not out overnight, guided his attempt to slide the ball to third man into the hands of Rayner.

But tempers then became frayed early in the visitors' reply when Notts thought Robson had edged Luke Fletcher through to wicketkeeper Chris Read.

Umpire Neil Mallender was unconvinced and words were exchanged between the fielders and the young opener, and Read threw the ball towards the stumps after taking each of the next two deliveries.

The officials intervened, requesting order to be restored but it flared up again in the next over with Rogers surviving a claim for another catch behind, off the bowling of Ajmal Shahzad.

A succession of boundaries from both batsmen dampened the spirits of the home side, with Robson finally stroking Samit Patel through the off side to secure the victory.

"I couldn't have hoped for better really against a good side in Nottinghamshire, so very satisfying.

"We've been playing well but there was a case of when the season starts people stand up and guys did a fantastic job.

"Toby [Roland-Jones], particularly in the first innings, was fantastic and I can speak highly enough of Neil Dexter in the the second innings.

"We were short of bowling, with James Harris down [with a hamstring injury], so for Dexter to stand up and get five wickets, and three in an over, was just unbelievable and practically won us the game."

"For the first time in 11 years Notts will have to get used to the taste left by losing their opening County Championship fixture.

"Outplayed for the large part, not much went right for Mick Newell's side throughout - a trend that continued into the disastrous final morning.

"It took only one ball for the final wicket to fall and then the Middlesex openers eased to a 10-wicket success."