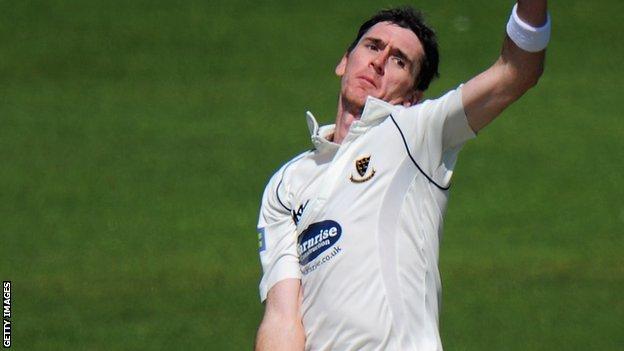 Sussex wrapped up victory early on the fourth day at Headingley as they beat Yorkshire by an innings and 12 runs.

The hosts were 228-8 overnight in their second innings, but failed to reach the 261 required to make Sussex bat again.

Jack Brooks and Gary Ballance added 20 to Yorkshire's total before Brooks was caught by Michael Yardy off the bowling of Chris Jordan.

Steve Magoffin dismissed Ballance off the next ball to finish with figures of 5-51 and secure the win for Sussex.

Ballance, recently called up to England's provisional 30-man squad for the Champions Trophy, quickly moved to his fifty before eventually falling for 63 when caught by wicketkeeper Ben Brown.

Partnered by Ryan Sidebottom in a stand of 81 late on Friday, Ballance had helped ensure that Yorkshire's first game back in the First Division of the County Championship went into the final day.

But their resistance lasted just under 30 minutes as Sussex started the new season in fine style.

"It's all over and it didn't take long. Sussex needed less than 30 minutes to wrap this game up, with Steve Magoffin finishing off the Yorkshire tail with figures of 5-51, with Gary Ballance the pick of the batting with 63.

"A disappointing game for the hosts but Sussex will be delighted with an innings victory, and kick-off the new County Championship season with a bang."