Sachin Tendulkar - one of the world's greatest ever batsmen - celebrates his 40th birthday on Wednesday.

To mark the occasion, BBC Radio 5 live has spoken to those who know him best or who played alongside him.

Here we select the Indian maestro's greatest innings since he made his international debut in 1989 as a precocious teenager from Mumbai.

Picking out the Little Master's best innings is a difficult task - considering he has scored 100 international centuries - but nonetheless BBC Sport has spoken to those who played with and against Tendulkar and asked them for their picks.

There was no greater test of a young Sachin's credentials than against Pakistan and their much-vaunted seam attack of Wasim Akram, Waqar Younis and Imran Khan.

On his debut tour, the 16-year-old Tendulkar showed his promise with two half-centuries at Faisalabad and Sialkot - the second of which was particularly impressive.

Pakistan paceman Akram, who took more than 400 wickets in his 104-Test career, remembers the first time he faced the teenage talent. 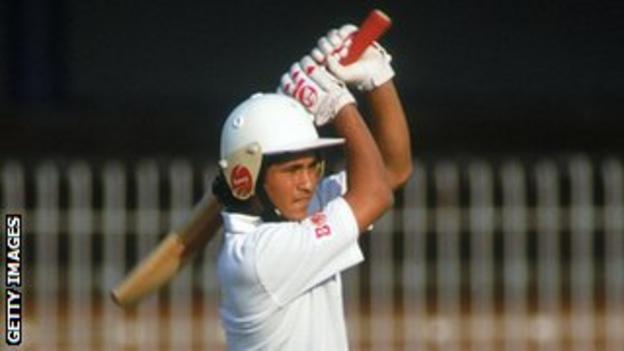 "I recall when Sachin first came to Pakistan - I was 21 and, like Waqar, I had real pace," said Akram. "I remember reading a newspaper report saying a young batting sensation was going to tour Pakistan with India, that he had broken schoolboy records with Vinod Kambli.

"I remember thinking it didn't matter how good he was, he was only 16. International cricket is a different ball game to schoolboy cricket.

"The first time I saw him he looked 14 and I spoke with Waqar and we knew what we were going to do - and it worked because in the first Test he got just 15.

"The fourth Test was played on a lush green track and in the second innings I bowled Sachin a bouncer which hit him on the chin and opened up some cuts.

"I thought to myself that it wouldn't be too long before we got him out but he stayed there and got 50. His technique stood out, his body was behind the ball and from then on myself and Waqar realised he was something special."

Tendulkar scored his maiden Test century in his ninth match, aged just 17. Graham Gooch, Michael Atherton, Allan Lamb and Robin Smith had all scored hundreds as England set India an improbable target of 408 on the final day at Old Trafford.

The only realistic chance of a result was if India were bowled out - a scenario which seemed possible when they slumped to 35-2 against an England attack containing Devon Malcolm, Angus Fraser, Chris Lewis and Eddie Hemmings.

However, Tendulkar settled any nerves when he stroked an imperious 119 not out from 189 balls to secure a draw. 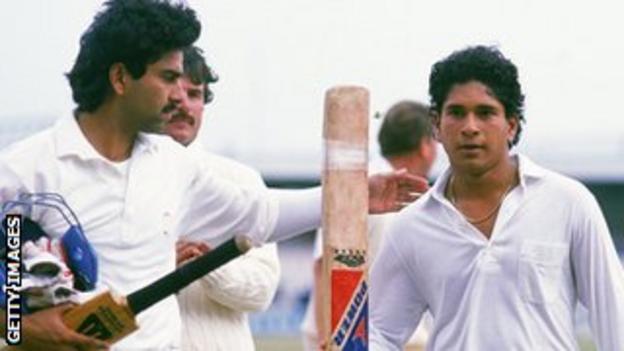 Kapil Dev, who led India to the World Cup in 1983 and played 131 Tests for his country, batted alongside Tendulkar during that innings.

"Two different things struck me about him - his balance was unbelievable and so was his timing," recalled Kapil, who scored more than 5,000 runs and took 434 wickets in his Test career.

"He didn't hit the ball, he just pushed it to where he wanted it to go. He had amazing control and he had a gift which meant he could read deliveries quicker than others.

"I noticed he batted right-handed but did everything else with his left hand - eating, signing autographs etc. That showed to me that he is a genius who has power in both hands. If you can have evenly-balanced power you can control the bat and ball much better."

Widely regarded as Sachin Tendulkar's finest innings, the Little Master underlined his incredible ability with a gutsy century at Perth.

On one of the quickest wickets in world cricket, Tendulkar blunted Craig McDermott and Merv Hughes when the rest of the India team were struggling. 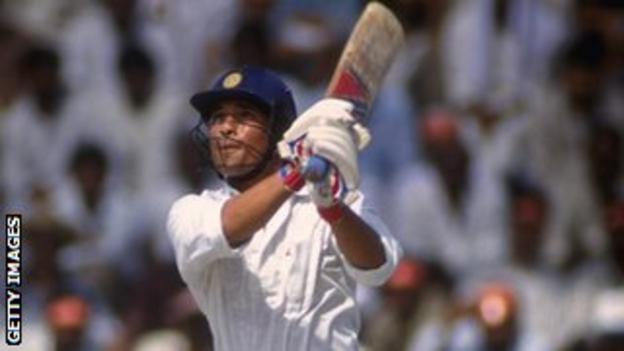 Only three other Indians passed 30 as the tourists fell short of Australia's first innings total and eventually slid to a 300-run defeat.

Sunil Gavaskar, who held the record for most Test runs scored by an Indian before it was bettered by Tendulkar, hailed Sachin's 114 as one of his finest knocks.

"That century at Perth was a terrific innings," said the former India captain. "He was just 18 years old, playing in Australia for the first time on pitches where there was extra bounce and movement.

"Nobody else scored any significant runs so it was really special - the way he controlled the innings and played shots all around the wicket."

Sourav Ganguly, who played alongside Tendulkar for 12 years, watched the innings from the changing rooms.

"Sachin has scored 100 international hundreds but that one was the best," said Ganguly. "We were hammered in that series - we lost the first four Tests - but in the fifth match he smashed McDermott and Hughes on a quick Waca pitch.

"In those days, we used to go to Australia once every six years so it was even more difficult to get used to the bounce and pace. He played an absolute blinder that day."

It might not have been the biggest score of Tendulkar's career, but his 44 against West Indies in a one-day international in Trinidad was another courageous and skilful display of batting.

Opening the innings, he top-scored as India were bowled out for 179 on a difficult pitch - Curtly Ambrose taking 4-36. India's pacemen were not as effective and the Windies raced to victory. 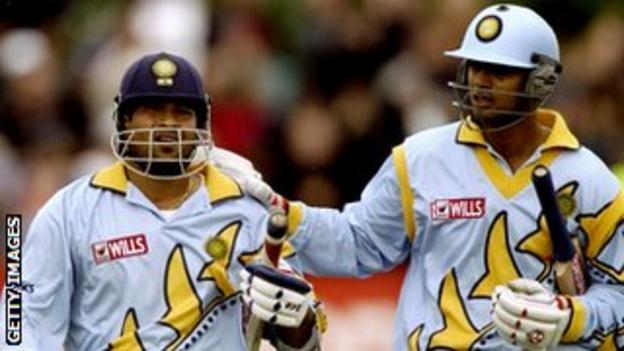 India batting legend Rahul Dravid, who also played in that match, rates the knock as the best he has seen Tendulkar play.

"I saw so many great innings," said Dravid, who scored more than 13,000 Test runs in his career. "It was such a privilege to play with him and share so many innings.

"If I could pick one it would be an innings of 40 he made in a one-day match against West Indies in Trinidad and Tobago.

"It was a tough wicket, we lost the toss and the Windies had excellent fast bowlers in Ambrose, Courtney Walsh and Ian Bishop. The ball was moving all over the place, some were bouncing, taking off, and we were struggling.

"Sachin decided to take them on and he got 44 off 43 balls. He played all sorts of shots, he cut them, pulled them, hit over the top and this was against a formidable attack. In the end he got a poor decision but it was great to watch. It's an innings I always remember."

Tendulkar captained India on their tour down under in 1999 and he came under severe pressure as the all-conquering Aussies outplayed the tourists.

His side lost all three Tests, but the Little Master still top-scored for his country with 278 runs at an average of 46.

His best knock was a century in Melbourne against a rampant bowling attack which contained Glenn McGrath, Brett Lee and Shane Warne. 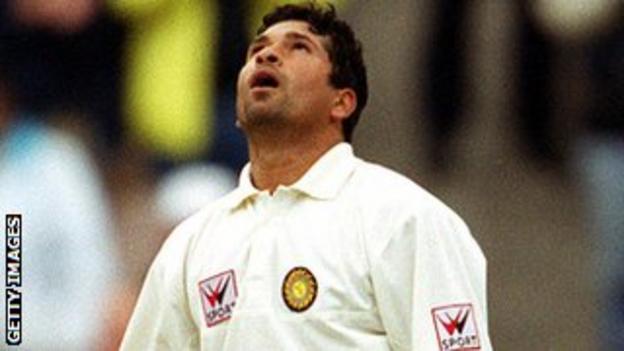 India batting legend Rahul Dravid, who averaged just 15.5 in that series, remembers Tendulkar leading from the front with the bat.

"The team was struggling and we lost the series 3-0," recalled Dravid. "Sachin was captain and was under pressure.

"People were questioning his captaincy and the performance of the team but he blocked it out and got a hundred against a really good Australian attack on a difficult pitch."

Tendulkar has scored six double hundreds in his Test career, but few were as impressive as the unbeaten knock he produced against Australia in Sydney in 2004.

His sparkling knock helped the tourists rack up an incredible 705-7 declared, but they could not force victory and the match was drawn.

It was a return to form for the Little Master, who had scored two ducks in three of the previous Tests. 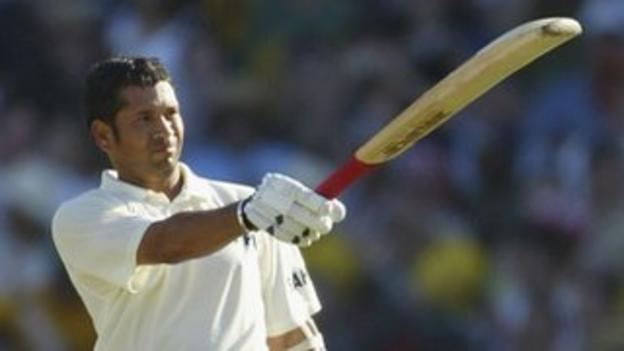 Rahul Dravid made 91 not out in the second innings of that match and he remembers Tendulkar dominating the home side's bowlers - Brett Lee, Jason Gillespie, Nathan Bracken and Stuart MacGill.

"He got a double hundred at the SCG when he was struggling for form, but he was extremely determined," said Dravid. "When he wasn't at his best he was able to knuckle down and fight for runs.

"The game meant so much to him and he never lost track of the fact that he had to earn every run. His game was built around the basics. He was solid in defence, had all the shots and was an extremely good judge of length and line.

"Early on in his career he was extremely creative and his natural instinct was to attack, but over the years he learnt to adapt his game. It was a combination of things but he just loves to score runs."