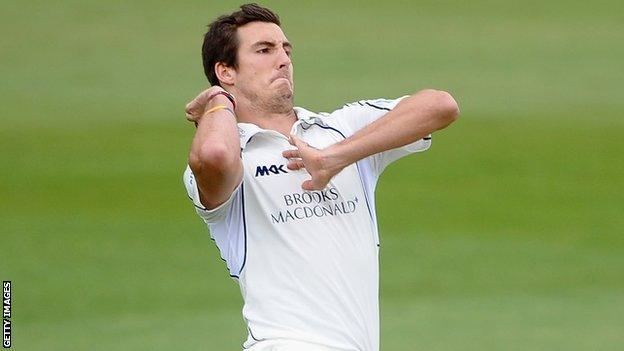 England paceman Steven Finn claimed the 300th wicket of his first-class career on day one of Middlesex's Championship game against Derbyshire at Lord's.

Finn, on his first appearance of the new county season, reached the landmark in having Wes Durston caught for 48.

He added three more victims for figures of 4-36 from 22 overs, but could not shift opener Billy Godleman.

The left-hander faced 265 balls for 55 before falling to Tim Murtagh in the 91st over as Derbyshire ended on 205-9.

Godleman was dropped in the slips on two and only managed a single boundary. But, although his innings lacked flamboyance, his sustained concentration stretching over five hours and 54 minutes before he was lbw saved his side from total collapse.

Derbyshire, who began the summer with a rain-affected draw against Warwickshire, started the match badly when a shot by skipper Wayne Madsen ricocheted off partner Godleman's pads and he was run out by opposite number Chris Rogers as he tried to recover his ground.

It was slow going thereafter as last season's Division Two champions mustered only 59 runs in the morning session off some tight bowling.

Godleman and Durston's partnership reached 83 before Finn had the latter taken by Toby Roland-Jones and Gareth Berg then picked up the key wicket of Shivnarine Chanderpaul (18), whose mis-timed pull was caught by Joe Denly.

Finn then had Dan Redfern and Chesney Hughes caught behind in successive overs and won a leg-before decision against Jonathan Clare as Derbyshire slumped to 150-6.

"It was a fascinatingly close first day at Lord's that swung in the hosts' favour with the fall of late wickets.

"Despite losing only three wickets before tea, Derbyshire's perseverance was not rewarded with a bounty of runs.

"Billy Godleman's innings appeared to be laying a foundation, but Chanderpaul's soft departure started a wobble that became severe damage in the evening's collapse.

"The pitch appears to offer enough to both batsman and bowlers, but Middlesex know they have the chance to secure a sizeable first-innings advantage after a confidence building start for them at Trent Bridge last week."