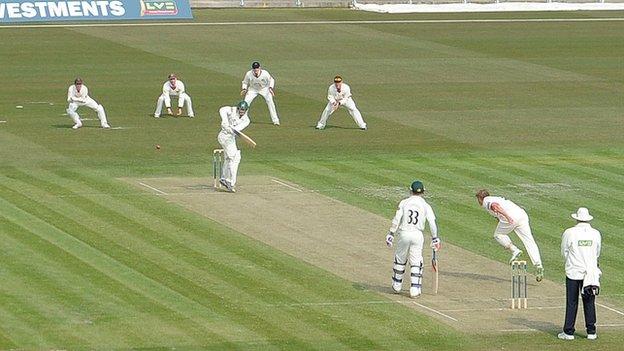 Worcestershire director of cricket Steve Rhodes is confident that his team are over the stomach bug that hampered last week's County Championship opener against Lancashire at Old Trafford.

Skipper Daryl Mitchell was one of several Worcestershire players affected, having to bat down the order at number seven.

But he is fit for the county's second game against Glamorgan in Cardiff.

The only change is the inclusion of paceman David Lucas in a 13-man squad.

Pakistan captain Misbah-ul-Haq has revealed that he was a target for Worcestershire this summer.

"It was a good two-year offer with an extension of another year from Worcestershire but since the contract required me to skip the national duties I turned it down," the 39-year-old told AFP.

"It gives a cricketer a good experience of English conditions but, as the captain, I have a lot of responsibility and leading the team is my first priority."

"He went down with it late on that first morning, practically as they were going out to toss up.

"It's a bug that's been doing the rounds in the dressing room. We've had a few lads off with it the last couple of weeks."

With Lancashire among the Division Two title favourites, Rhodes would have been encouraged by Worcestershire's draw in a rain-affected game at Old Trafford.

Mitchell and Moeen Ali both hit half centuries as Worcestershire compiled a first innings score of 334 - a total they bettered just once the whole of last summer.

Meanwhile, Dutchman Alexei Kervezee has announced that he is to retire from international cricket at 23 in order to concentrate on his county career at New Road.

The Namibia-born batsman was one of those who endured a disappointing 2012, losing his place after a poor start to a season in which he hit just 283 runs in six Championship appearances.