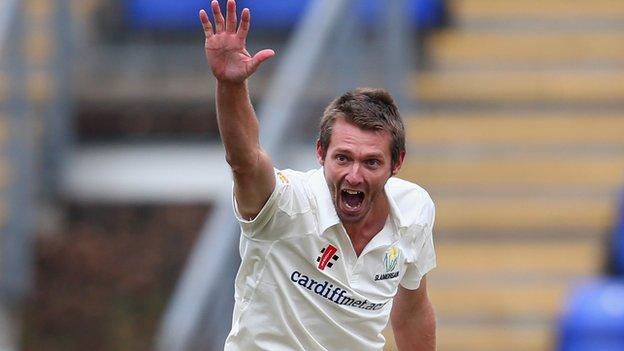 Glamorgan paceman Michael Reed claimed his first five-wicket haul for the county in only his sixth Championship game as Worcestershire were bowled out for just 123 on day one at Cardiff.

Backed by Australian Michael Hogan, who took 4-33, Reed weighed in with 5-27 as the visitors lasted 63.1 overs.

"Reed and Hogan look like real prospects for Glamorgan - both used the conditions to very good effect, backed up by some astute fielding positions from skipper Mark Wallace to get rid of Matthew Pardoe and Moeen.

"Graham Wagg's early-morning frugal spell set the tone for the day, although from 55 for 1 it was a steady procession for Worcestershire.

"Gareth Andrew probably got the best ball of the day, after an uncharacteristic innings, which pitched leg and took top of off. Just about unplayable.

"The gloom then descended and while we know the reasons why, to see play called off with four large floodlight pylons leaning over the ground is a little frustrating, after other grounds have switched them on this season."