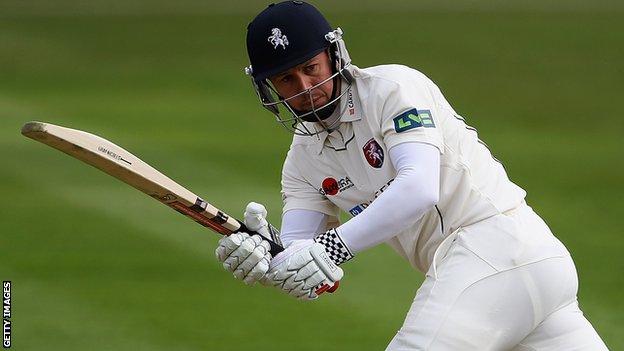 The home side were handicapped by the loss of Matthew Hoggard, who had to go off after only bowling five overs.

However, they were all out for 406 in the last over, off-spinner Jigar Naik (4-97) picking up the final wicket.

"It was good to get out there and bat on a decent deck. It was one of the most windy days I've played on"

Leicestershire gave a debut to Robbie Williams with Nathan Buck, Anthony Ireland and Alex Wyatt all unavailable because of injuries. And they could ill afford the loss of former England Test star Hoggard, who conceded 27 in his brief spell with the new ball.

Former Kent skipper Rob Key looked in good touch before being caught for 41.

Seamer Ollie Freckingham followed up a good performance last week with the wickets of Nash and Michael Powell.

But the home side suffered as Jones and Coles added 104 in 19 overs, tail-ender Mark Davies helped himself to 41 off 44 balls, while debutant Callum Haggett, coming in at 9, made 40.

"What a blustery day this was and Kent's batsmen certainly batted up a storm to claim maximum batting points from their first County Championship innings of the season.

"Although Leicestershire took wickets at regular intervals to slow the charge, Kent pulled away at every opportunity.

"Honours for the day went to 23-year-old Callum Haggett, making his county debut for Kent. He looked assured and strode to 40 to push the Kent innings above the all important 400 mark.

"Kent are in a commanding position and may yet make it a winning position, having failed too many times in recent years to pass 400 in their first innings."