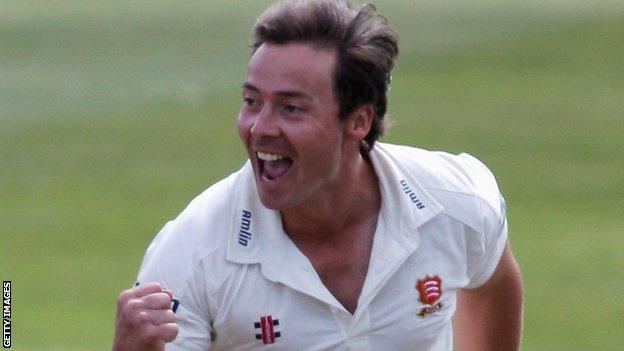 Graham Napier clawed Essex back into the match on day one at Northampton.

The all-rounder bludgeoned an unbeaten 73 (62 of them in boundaries) as Essex were bowled out for 183, Steven Crook taking four first-innings wickets for the second successive game

Skipper Stephen Peters hit 60 before edging to first slip, but Rob Newton was still there at the close on 35.

Northants had looked set to skittle the visitors for less than 150, reducing them to 138-9 before Napier took centre stage.

In just 28 balls, the former England Twenty20 international and last man Tymal Mills put on 45 for the 10th wicket.

That included Napier hitting 22 off a single Crook over before David Willey ended the fireworks.

"Rob Newton used his luck, being dropped and playing on while not dislodging the bails, but he's still there as Northants close in on a first innings lead.

"Once again, the home side bowled tightly as a unit and restricted Essex until that cameo by Graham Napier, which included three sixes in the same Crook over.

"But a Northants lead of around 100 will leave Essex with an awful lot to do."

"This was far from a typical Wantage Road wicket and the Northants attack took advantage of its pace and movement on winning the toss to bowl Essex out by mid-afternoon.

"But the visitors are still in this match thanks to Graham Napier, who then also led with the ball.

"Essex need to keep any Northants lead below 50 and hope for an improved batting performance to put the hosts under pressure."