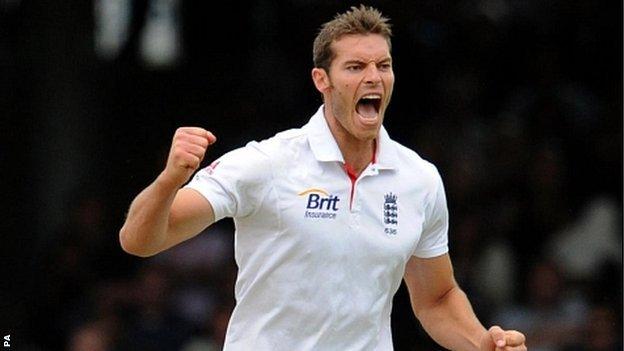 We're doing something a bit different this week as I take on some of your questions on a variety of cricketing topics.

A big thank you to all those who sent them in on Twitter via the hashtag #AskStewie.

Q) If Chris Tremlett gets back fit, do you see him getting into England's Ashes team and if so, who will he replace? (@stehoare)

I know England are desperate to have Chris Tremlett back in their Test squad because he adds something to the mix. As he proved in the last Ashes series down under, he is a world-class performer when fit and firing. With his pace and bounce he can trouble the very best batsmen.

He has worked exceptionally hard this winter after a serious injury and, after speaking to him at The Oval, he wants to get back playing for Surrey and force himself into England contention.

The question of who he replaces is an impossible one to answer because it depends on which bowlers are fit and showing top form at that specific time.

"Kevin Pietersen's knee injury setback is a major concern for England ahead of such an important summer. The initial prognosis of bone bruising did not sound too serious but it is worrying that after a period of rest, with the knee in a brace, there has been no improvement.

"The priority for Pietersen must be getting fully fit for the Ashes and there has to be a question mark over his participation in the Champions Trophy in June. He would need to prove himself in four-day cricket for Surrey before he can be considered for England duty and he won't want to take a risk until his knee is fully back to normal.

"You can't rush these things but I'm convinced Pietersen will be getting the best possible medical advice to get him ready to take on the Aussies."

Not currently, no. I'm not quite sure why you would want him to bat at six when you have someone of the calibre of Matt Prior, who is more than capable of batting there if England want to play a fifth bowler.

Woakes is a promising young bowler who is developing nicely at Warwickshire. If he continues to make progress he could yet be an option at number seven for England as a bowling all-rounder. This would be a great addition to England's armoury because they are yet to find a replacement for Andrew Flintoff in that role.

Q) Apart from Michael Clarke I'd have no Aussies in the England team. How poor is this Australia side and are we right to write them off? (@simonturner)

I am certainly expecting England to win the Ashes but I think the Australia seam bowling attack will surprise a few people. In Mitchell Starc, James Pattinson, Peter Siddle and Patrick Cummins they have a quartet who have all proven themselves in Test matches and could be a handful in English conditions.

Clarke aside, their batting is severely lacking in experience but every Australian side will be a battling one. They are a proud cricketing nation and won't go down without a fight.

Q) What changes would you make to the domestic Twenty20 competition? (@D1PZ)

I want to see as many people coming through the gates as possible and I'm delighted that next season the Twenty20 competition will be spread out over a longer period, with matches played on the same days each week. This has to be an improvement on the current situation where all the matches are crammed into a short period and one match just blends into the next. Last year Surrey had four home matches in seven days which is really tough on the players and spectators. To expect anyone to pay £25 four times in a week was just ridiculous.

I would also like to see a certain number of games planned when England players are available so that you could see exciting match-ups between international players. Imagine Graeme Swann and Stuart Broad playing for Nottinghamshire against a Yorkshire side featuring Tim Bresnan, Jonny Bairstow and Joe Root.

Every match needs to be an occasion and you do that by making sure your best players are available as often as possible.

Q) After you, is Adam Gilchrist the best wicketkeeper-batsman of all time? (@moreland79)

Adam Gilchrist is the best keeper-batsman I've seen bar none. He was a very competent gloveman but it was his batting that made him special. Whether Australia were 300-5 or 120-5 when he walked in, he would still impose himself on the opposition. I was there in Perth in 2006 when he took Monty Panesar apart in scoring the second-fastest Test century of all time. He was such a clean striker of the ball and could hit it wherever he wanted.

In his time, Gilchrist was without parallel in the game but Matt Prior and AB de Villiers are now getting very close to his level.

Q) What is the best innings you ever witnessed from behind the stumps? (@seo1990)

Although I was in the field rather than keeping, it is hard to look beyond Brian Lara's 375 for West Indies against England in Antigua in 1994. Over more than 12 hours at the crease he was a man in total control of what he was he was doing in attack or in defence. It takes a phenomenal level of concentration and fitness to bat for that length of time and he never looked like getting out.

Obviously it was frustrating and demoralising to watch at the time but you look back and think you were a part of history because you had one of the best seats in the house for one of the great moments in the game.

Q) What was the best country to chill out in after a Test match? (@Spurs4u)

I thoroughly enjoyed playing in the Caribbean where the lifestyle is as laidback as you'll find anywhere in the world. But to be honest, if I'd won the match, I was happy wherever I was.

Q) What's the worst captaincy decision you ever made? (@englishgiant83)

As a captain you always make decisions because you believe they are right at the time but there are one or two selections I was involved in that I would reconsider with the benefit of hindsight.

One was not picking Nick Knight in the 1999 World Cup to open the batting. We went for Nasser Hussain instead because Nick was not in the best of form at the time. On reflection, we should probably have looked beyond his short-term slump and trusted him to rediscover the match-winning talents he had shown previously.

Similarly, leaving out Andy Caddick for the 1998-99 Ashes series after he had taken 100 wickets for Somerset is something I would look at again, given what Caddick went on to achieve. We decided to keep faith with the squad that had just beaten South Africa at home.

Q) Have you ever thought about full-time coaching? (@MohmedSheikh)

I've not considered full-time coaching because I enjoy the variety of still being involved in the game as opposed to just having the one role. If you are going to be a coach, you have to throw all of your efforts into it, which is something I would not be able to do at present because of my various working commitments. I would never say never but it's not something I'm seriously considering at the moment.

Q) Who would win a fight between you and Michael Atherton? (@Smokesniper)

That would be a total mismatch, but he would beat me at Mastermind, that's for sure.