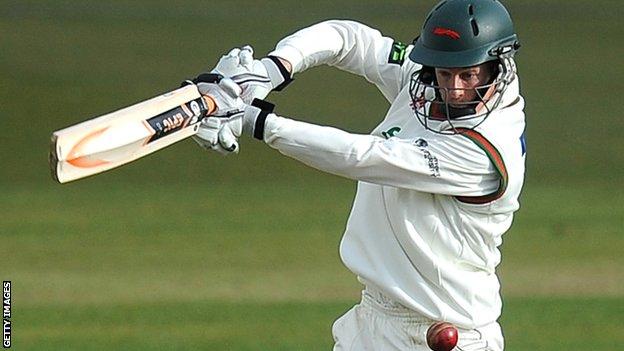 Ramnaresh Sarwan and Matthew Boyce made half centuries in a fighting stand of 95 as Leicestershire dug in on day two against Kent at Grace Road.

After the visitors scored 406 on day one, they needed a solid start and Niall O'Brien provided it with 63.

He put on 80 with the promising Ned Eckersley (46) before both fell to debutant Calum Haggett, who took 3-57.

"It's nice to have Darren Stevens there to make crucial breakthroughs like that. There'll be a new batter in the morning at the crease, we have the new ball, and Sarwan is a very fine player so to have got him out was a bonus."

Darren Stevens was the successful bowler, with Sarwan edging to keeper Geraint Jones, but it was a disappointing end for the West Indies Test player, who had brought up his fifty from 91 balls.

Having failed to avoid the follow-on against Hampshire last week, however, it was a much more determined display from the home team, with Joyce collecting nine boundaries in his 115-ball innings.

"When Kent took three quick wickets in mid-afternoon on another windswept day at Grace Road, thoughts may have turned to getting Leicestershire out cheaply and setting up victory but Boyce and Sarwan put paid to that.

"Sarwan's dismissal, to an edge of Darren Stevens in the the last over of the day brought fresh hope to Kent.

"Stevens, suffering from a side injury, is only likely to be used sparingly, hence the inclusion of Callum Haggett who impressed for the second day running taking three wickets bowling into the teeth of a howling gale."