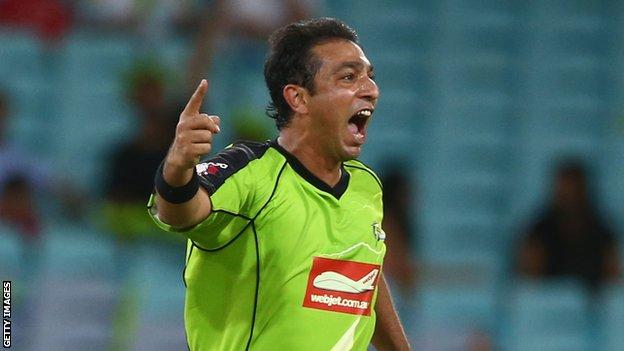 Surrey have announced Pakistan all-rounder Azhar Mahmood will return to the club this summer as a non-overseas player for the FL t20 competition.

The 38-year-old, who is the fourth-highest wicket taker in the shortest format of the game, left Surrey in 2007 after six seasons at The Oval.

Surrey team director Chris Adams said: "This club has been starved of his talents over the last few years.

"To have such a high skilled player of his quality is a great bonus for us."

He added: "From what I gather Azhar has been sorely missed since he left and should never have really been allowed to leave the club.

"He looks fit and strong and mentally it looks like he is enjoying his cricket.

"He comes with a wealth of experience, a great record behind him."

Mahmood has been playing for Kent since leaving Surrey but his contract was not renewed this winter due to his Twenty20 commitments abroad.

He has represented Sydney Thunder in Australia's Big Bash league and Cape Cobras in South Africa's domestic competition and is currently playing for the Kings XI Punjab in the Indian Premier League.

Mahmood, who became a British citizen in 2011, will be available to play in the whole of the FL t20 tournament for Surrey.

"It feels very special to be coming back to Surrey," he said.

"Obviously it's a very different set-up to when I was last at Surrey and Twenty20 cricket has also gone from strength to strength.

"It looks strong and a real mix of youth and experience, and I look forward to catching up with the guys when I get back from India."