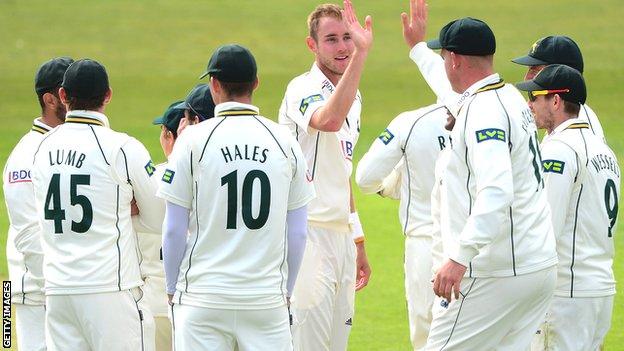 England fast bowler Stuart Broad took 4-57 as Nottinghamshire were held up by Derbyshire's West Indian Shivnarine Chanderpaul on day one at Derby.

Broad, set to play against New Zealand next month, helped reduce Derbyshire to 75-6 after Billy Godleman's 31.

Chanderpaul (87 not out) frustrated Notts, but Harry Gurney (4-86) mopped up the tail as the hosts were dismissed for 256, despite Tony Palladino's 39.

Broad took his first wicket in his third over of the day when he trapped Wayne Madsen lbw for nine.

Andre Adams accounted for Wes Durston before the Notts man limped off the field with a suspected calf injury with one ball remaining of his eighth over.

After Broad saw off Godleman and Dan Redfern, Gurney got rid of Ross Whiteley and David Wainwright in successive overs, but veteran Chanderpaul and Jonathan Clare (49) held up Notts for nearly 24 overs, putting on 96 for the seventh wicket.

Palladino hit seven fours in his innings before becoming the fourth catch of the innings for wicketkeeper Chris Read.

Openers Ed Cowan - named in Australia's Ashes squad to tour England earlier in the day - and Alex Hales saw Notts to the close without any real alarm.

"Two high quality performers showed their respective worth as these local rivals locked horns for the first time in six years.

"Pitching the ball up and bowling quickly Stuart Broad got full reward in his first work-out of the summer, taking 4-57 from 22 overs.

"One man that escaped his clutches was Shivnarine Chanderpaul. The West Indian is sure to shoulder the full responsibility for scoring the runs that will keep his side competitive and his undefeated 87 was a masterpiece in dogged defence and elegant strokeplay.

"A proper day of championship cricket - loved it!"