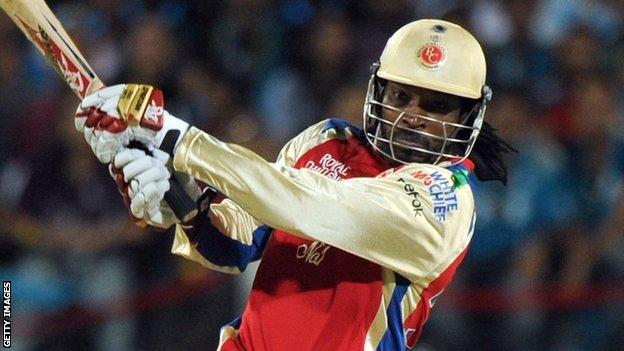 Chris Gayle set a new record for the fastest century in professional cricket by reaching 100 off 30 balls.

The West Indies batsman, 33, beat Australian Andrew Symonds's 34-ball ton in 2004 and he went on to record the highest Twenty20 score of 175 not out.

Gayle smashed 17 sixes and 13 fours in a 66-ball knock, beating Brendan McCullum of New Zealand's 158 not out.

His Royal Challengers Bangalore side hit a T20 record 263-5 and beat Pune Warriors in the Indian Premier League.

That score eclipsed the previous best of 260, set by Sri Lanka against Kenya in Johannesburg in September 2007.

Gayle also took two wickets late in the Pune innings as they scored 133-9 in reply, with Royal Challengers winning by 130 runs.

He told ITV4: "I'm lost for words. It was just one of those days. It's a good wicket and I started well.

"All I had for breakfast this morning was a plain omelette, two pancakes and a hot chocolate."

In November last year, Gayle became the first man to hit a six off the opening ball of a Test match - the left hander hit Bangladesh debutant Sohag Gazi for a maximum in the first Test in Dhaka.

Symonds set the previous record for the fastest century in 2004, playing for Kent against Middlesex in the Twenty20 Cup.

Pakistan's Shahid Afridi hit the fastest century in 50-over cricket in 1996, reaching a ton in 37 balls against Sri Lanka in Nairobi.

The fastest century in Test cricket belongs to Gayle's fellow West Indian batsman Viv Richards, who needed 56 balls to achieve the feat against England in Antigua in 1986.

India captain Mahendra Dhoni, who plays for Chennai Super Kings in the IPL, expressed sympathy for Pune's bowlers after Gayle's record innings as he tweeted: "Life is all about taking the right decision. Seeing Gayle bat today, I think I took the right decision being a wicketkeeper."