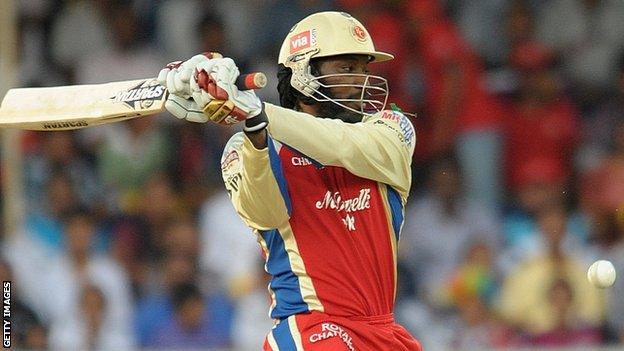 When Chris Gayle walked off the field in Bangalore on Tuesday, his Pune Warriors counterpart Yuvraj Singh playfully tried to steal his bat. Maybe he wanted to check it for dynamite.

After all, the West Indian opener had just blasted the fastest hundred in cricket history and the highest score - 175 not out - in any Twenty20 match.

The innings, lasting only 66 balls, included a mind-boggling and occasionally traffic-threatening 17 sixes, and left team-mates and Indian Premier League opponents alike grappling for the right words to describe what they had just witnessed.

"That was simply the best innings I've ever seen," said Warriors captain Aaron Finch before joking: "Maybe we should ban him from the game. Maybe he's too good, he hits it too far."

"I'm privileged that I watched it here live," said Virat Kohli, captain of Gayle's Royal Challengers Bangalore side. "All the people who came to the stadium today should feel honoured that they got to see one of the best innings ever."

If awe was the order of the day, few who witnessed Gayle's pyrotechnics either live or on television will have been surprised by what they saw.

Over the years, Gayle has displayed such an appetite for the game's shortest form that is tempting to speculate that he played a part in its inception in English county cricket almost exactly 10 years ago.

Tall, powerful and blessed with impeccable timing, Gayle scored the first century in Twenty20 internationals when he reached 117 from 57 balls against South Africa in the first game of the inaugural ICC World Twenty20 tournament in 2007.

He has scored a record 11 Twenty20 tons, six more than New Zealand skipper Brendon McCullum and Australia opener David Warner, who have both played a higher number of matches.

And in six seasons in the IPL, he has hit more sixes (163) and more hundreds (four) than anyone else at an astonishing average of 55.90.

While Gayle's attacking style makes him ideally suited to limited-overs cricket - he has played Twenty20 domestic cricket in six different countries - he has also produced some memorable moments for West Indies in the Test arena, showing an ability to adapt his style to the state of the match.

In 2009, he batted for more than seven hours to make an unbeaten 165 to salvage a draw against Australia in Adelaide before smashing a hundred off 70 balls - the fifth fastest in Test history - in the following match.

He is also one of only four batsmen to score two triple hundreds in Test cricket, the second of which was a magisterial 333 against a Muttiah Muralitharan-inspired Sri Lanka in Galle.

And although a dispute with the West Indies Cricket Board led to him sitting out more than 18 months of Test cricket, he returned in July 2012 to smash 150 and an unbeaten 64 in a nine-wicket victory over New Zealand.

Part of Gayle's appeal is the way he makes playing cricket look so effortless and enjoyable, strolling to the crease with his black bandana and dreadlocks, bludgeoning the ball over the ropes with what appear to be little more than wafts of his bat and celebrating wickets with his own version of the "Gangnam" dance.

But according to his Windies team-mate Ramnaresh Sarwan, Gayle's laid-back image belies a determination to keep on improving his game.

"When he works out in the gym he does an awful lot of weights," Sarwan told BBC Radio 5 live.

"He is very, very strong, has good eyes and coordination. From a very young age we could see he was going to be special and it's really good to see him do so well."

After reclaiming his bat from Yuvraj's pesky paws, Gayle walked to the boundary with a beaming smile on his face before being asked by a TV crew what he could possibly have had for breakfast that morning.

"A couple of pancakes and an omelette," was his matter-of-fact reply.

In the wake of the superhuman efforts that followed, it would hardly be surprising if the supermarkets of Bangalore were running low on eggs.