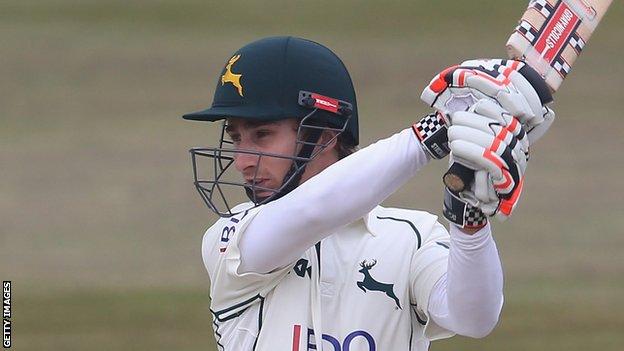 After Nottinghamshire began the day 69 runs ahead, Taylor went on to make 112, his third century for the county before being dismissed by David Wainwright.

England all-rounder Stuart Broad was dropped three times on his way to 41, as the visitors were all out for 443.

Tons of runs for Taylor

The day began badly for Nottinghamshire, resuming on 325-5, when Read was caught in the seventh over, but Taylor struck up a 59-run partnership with Broad to stretch their lead.

Broad fell to Jonathan Clare, who had a hat-trick opportunity after taking Andre Adams with the next ball, but Luke Fletcher denied the medium-pacer.

The Notts wickets began to tumble, leaving Derbyshire chasing 187 but their reply got off to a terrible start when Billy Godleman and Wes Durston both went lbw to leave the hosts 24-2.

Chanderpaul and Madsen steadied the ship but Derbyshire go into the final day still in arrears.

"All Nottinghamshire supporters will have their fingers crossed as they open their curtains tomorrow, because surely only bad weather can prevent their side from completing a victory over their local rivals.

"James Taylor's six-hour vigil was rewarded with a century as the first innings advantage was gained.

"It was then built upon by a disciplined bowling performance, Luke Fletcher getting the prize scalp, the key wicket of Shivnarine Chanderpaul."