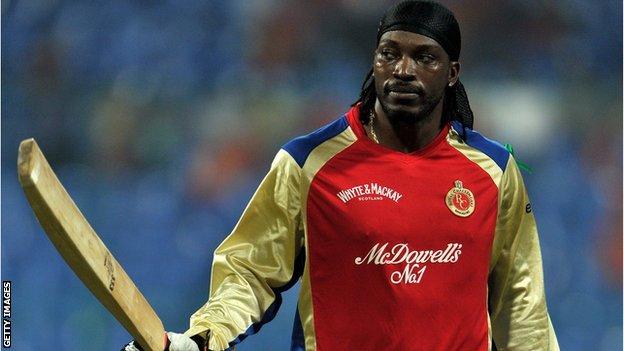 West Indies batsman Chris Gayle has told Somerset he is willing to play in their Twenty20 campaign if it fits around his international schedule.

Gayle had agreed a contract to be the county's overseas player for 2012.

However, the move fell through after the 33-year-old made himself available for the West Indies one-day international matches against England in June of that year.

Gayle has scored 8,442 runs in one-day internationals and only this week hit the fastest hundred in cricket history as well as the highest score - 175 not out - in Twenty20 cricket while playing for Royal Challengers Bangalore in the Indian Premier League.

He had agreed to spend the summer with Somerset in January 2012, during a period where he had fallen out with the West Indies Cricket Board and had not played for his country since March 2011.

But Gayle and West Indies officials resolved their differences, prompting the batsman to back out of his deal with Somerset so he could be considered for international duty.

The county opted against taking legal action against the Windies opener - a decision which Nash believes has worked in their favour.

"We could dig in and look to go down the legal route but thankfully good sense prevailed and we decided to take the longer term view," said Nash.

"He very generously reciprocated by declaring himself a member of the Somerset family. That was a happy ending."

West Indies are due to play in England in the ICC Champions Trophy in June, before taking part in a triangular tournament on home soil.

That competition, which includes India and Sri Lanka, runs until 9 July.