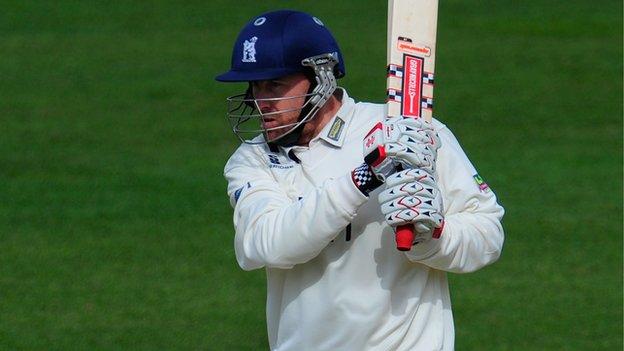 Warwickshire's last pair Rikki Clarke and Oliver Hannon-Dalby batted for over an hour to save the game for the county champions against Somerset at Taunton.

The Bears began the day on 144-3, still needing another 374 to win, knowing a draw was a lot more realistic target.

But, despite Somerset spinner Jack Leach taking 5-63, the Bears held on.

Clarke, labouring under the added problem of batting with an injured hamstring, was twice dropped in the slips.

But he shared an unbroken 51-run last-wicket partnership with No 11 Hannon-Dalby.

The gritty Yorkshireman survived one painful blow on the forearm from Alfonso Thomas, facing 62 balls in the end for his 10 not out.

Having having had to battle through one extra over on top of the statutory 16 in the final hour, Warwickshire eventually closed on 427-9.

It was a marvellous rearguard effort by the Bears but Somerset skipper Marcus Trescothick was perhaps left regretting his decision on Friday evening not to enforce the follow-on when the Bears were bowled out for 158 - 248 runs short of Somerset's first innings total of 406.

Warwickshire's escape maintains the county champions' unbeaten start under new coach Dougie Brown, leaving them in good heart going to Hove on Wednesday for the meeting with Sussex.

Somerset start a three-day game on Wednesday against Cardiff MCCU at Taunton Vale, before returning to Championship action at Headingley against Yorkshire on Thursday week (7 May).

"I've not been in a situation like that before in a first-class match.

"But, having an experienced player like Rikki Clarke with me was a great help. I'm thrilled that we were able to dig in and secure the draw.

"I got hit flush on the arm and my first thought was to ensure that it didn't look like I was hurt. You never want to show the bowler that.

"The adrenaline and treatment from the physio soon took over, as I was pretty determined to get through the game."

"Warwickshire, showing their resilience in astounding fashion to escape with a draw, are finding increasingly remarkable ways to wriggle out of awkward situations.

"It was all of their own making, having batted so poorly in the first innings, but their second-innings response was remarkable.

"Only the brave would have bet on a draw when the ninth wicket fell with more than an hour remaining but Oliver Hannon-Dalby showed remarkable composure to keep Rikki Clarke company to the end.

"There were plenty of talking points, not least Somerset's decision not to enforce the follow-on, while several umpiring decisions were also hotly debated. But, while Warwickshire's efforts earned only three points for a draw, more importantly, it denied a likely title rival the 16 points for a win."