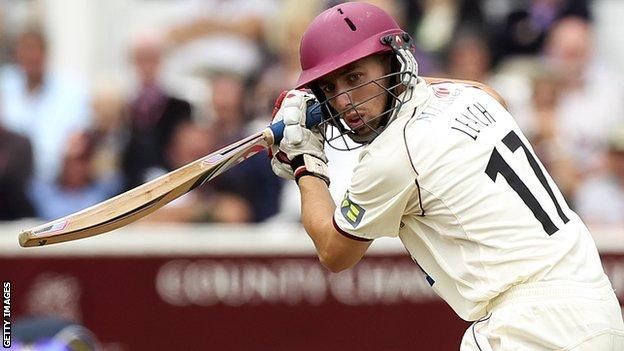 Young Somerset spinner Jack Leach says he was left disappointed with his side's draw with Warwickshire, despite taking a career best 5-63.

The 21-year-old took seven wickets over the four days - in what was only his third County Championship match.

"I bowled well and it felt good, but obviously it was disappointing not to get the win," said Taunton-born Leach.

"We dominated over the four days and that's why it's so disappointing. It feels like we lost."

Leach and Jamie Overton, who took 3-122, looked to be bowling Somerset to victory when they reduced Warwickshire to 376-9, still 138 behind, with more than 19 overs remaining.

But the 10th-wicket partnership of Rikki Clarke and Oliver Hannon-Dalby survived for 21.1 overs and secured the Bears a draw.

Leach spent much of last season playing for Somerset second XI but was brought in to face Warwickshire after George Dockrell missed out through injury.

"The more overs I bowled the better it felt," added Leach.

"I had a good winter and felt I've come back a better bowler.

"It's a proud moment because I've grown up watching Somerset. To be out there taking wickets is amazing.

"I feel confident and whenever I'm needed again I'm ready to go."