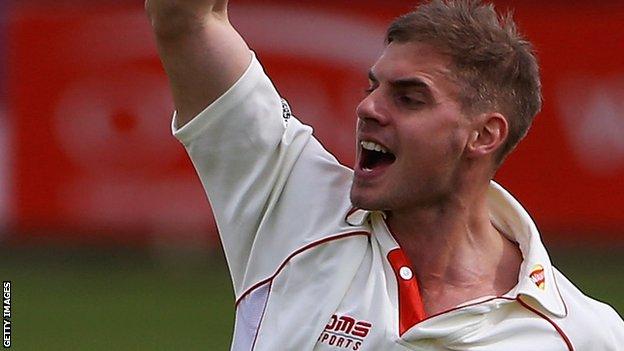 Ollie Freckingham was the pick of the Leicestershire bowlers on a rain-affected day at Wantage Road.

Northants, who were without captain Stephen Peters after the opener broke his finger in net practice before the match, eventually began their innings at 14:30 BST after rain.

He's going to have surgery and we need to get him in as quickly as possible, but it's not a straightforward break. Therefore we are looking at six weeks

Resuming two hours later, the hosts struggled to 91-4 at stumps.

Having been forced to wait for their opportunity, David Sales (10) was caught by Jigar Naik off the bowling of Alex Wyatt and Matthew Spriegel, making his first Championship appearance of the summer, fell for 11 to Robbie Williams, before acting captain Alex Wakely (18) was clean-bowled by Freckingham.

Rob Newton (22 not out) and Andrew Hall (12 not out) remained at the close and will hope to lead a recovery from their side on day two.

"The ball caught Stephen on such an angle that he knew straight away that he was in trouble. It had dislocated as well as broken.

"It's his right hand and is still dislocated so they've not been able to put it yet. He's going to have surgery and we need to get him in as quickly as possible, but it's not a straightforward break. Therefore we are looking at six weeks.

"He's made runs and brought leadership on his first year in the job and he's been doing a great job. It's also happened at quite a busy time so he's likely to miss around five championship matches. I feel for him and he's feeling very low tonight."

"After a late start and with a number of interruptions, the umpires got 34 overs in on a frustrating rain-affected day at Wantage Road - and it was the visitors' day after Leicestershire won the toss on a green wicket ripe for bowling on.

"Northants battled through, and ably despite the conditions, but they will be more concerned about captain Stephen Peters, their only in-form top-order batsman, who broke a finger in the nets before play began. He is likely to be out for up to six weeks after undergoing surgery and will be a major loss."