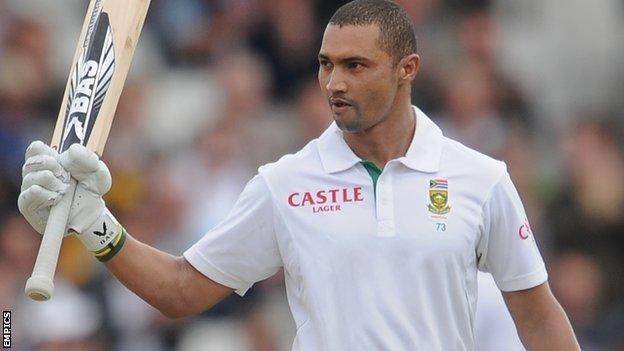 Smith has been ruled out with an ankle injury which requires surgery.

Petersen, also 32, has been a regular member of South Africa's Test side, but has not played a one-day international since January 2012.

He is currently Somerset's overseas player and has scored 495 runs at an average of 82.50 in his first three Championship matches this summer.

His call-up means he will be absent from county duties from 27 May until 24 June and will miss four YB40 games and three Championship Division One fixtures.

Cricket South Africa's convener of selectors, Andrew Hudson, said: "We have decided on a like-for-like replacement and Alviro is the obvious choice in this regard.

"He is a specialist opening batsman and also brings some very useful experience on board following the loss of both Smith and Jacques Kallis. In addition, he is in the form of his life."

Petersen has played 17 one-day internationals, scoring 437 runs at an average of 31.21, with four half centuries and a highest score of 80, made against Zimbabwe in 2006.

"I am excited and it's always nice to be selected to play for your country. I am really looking forward to making my contribution to this global event," he said.

Somerset director of cricket Dave Nosworthy has confirmed the club are in the process of recruiting a batsman to cover Petersen's absence.