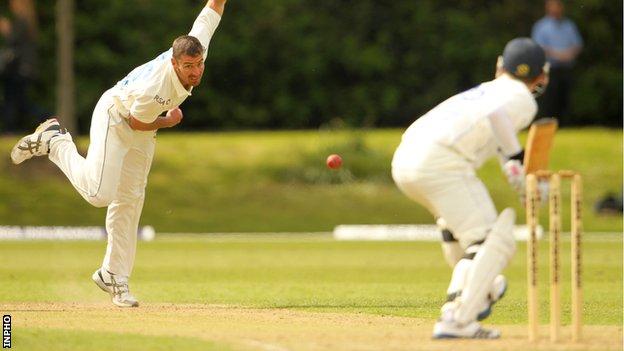 Bill Coghlan's unbeaten 71 has put Leinster Lightning in a strong position against North-West Warriors in the Inter-Provincial game in Dublin.

The Warriors were bowled out for 191, with Andrew Riddles hitting an unbeaten 47 as they recovered from 89-7.

Kevin O'Brien, Max Sorensen and Eddie Richardson each took wickets for the hosts at College Park.

Coghlan was in top form as Leinster closed the opening day of three on 105-1, trailing by 86 runs.

Having lost what proved to be a crucial toss, the Warriors were soon in trouble as Richardson and Sorensen grabbed early wickets to leave them struggling on 12-3.

Bready overseas player Romano Ramoo made 39 before being brilliantly run out by a direct hit from Sorensen just before lunch - at that stage the Warriors were 89-7 and facing humiliation.

The fightback started with an eighth-wicket partnership of 73 between Riddles and Johnny Thompson (45).

That gave the scoreboard some much needed respectability as they eventually finished on 191 in 65 overs.

Coghlan made the most of an early reprieve, dropped at slip by Thompson on 11, to grow in confidence as his innings developed.

The openers put on 99 before Pat Collins (25) was trapped lbw by Iftikhar Hussain just before the close.

Coghlan struck ten boundaries in his unbeaten 71 and will resume day two with a debut century very much in mind.