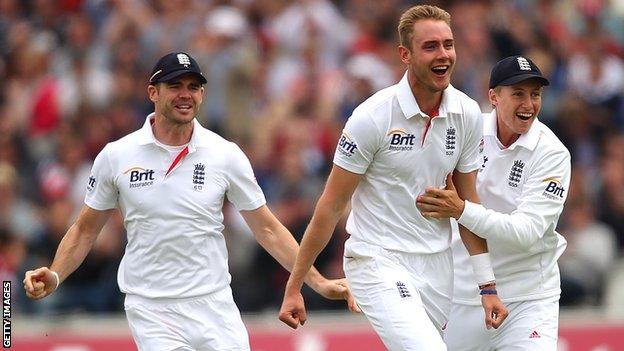 Stuart Broad took seven wickets in 11 overs to rip through New Zealand and inspire England to an astonishing 170-run win in the first Test at Lord's.

Chasing 239 for victory, the Black Caps were bowled out for 68 in 22.3 overs after lunch on the fourth day as Broad finished with Test-best figures of 7-44.

Only two players - Neil Wagner and BJ Watling - made double figures as New Zealand succumbed for the 10th lowest score in a Lord's Test.

"James Anderson and Stuart Broad looked a penetrative new-ball partnership and carried an air of hostility at Lord's that was not there on the tour of New Zealand.

"Anderson was doing things with the ball that were outrageous and, although he did not pick up as many wickets as Broad, the pressure he created was immense."

Just two hours earlier, the tourists appeared to have given themselves a good chance of victory when they took England's last four second-innings wickets in under an hour to bowl them out for 213.

But any chance of a successful run chase disappeared in a thrilling opening burst from Broad, who took advantage of seamer-friendly conditions to give England a 1-0 lead in the two-match series.

They needed only nine balls to break through as Broad found the edge of Peter Fulton's bat and Matt Prior claimed his 200th Test dismissal.

Brimming with intent as he charged in from the Nursery End, Broad uprooted Hamish Rutherford's off stump with a gem of a ball that darted away off the seam, and had Ross Taylor well caught low to his left at first slip by Alastair Cook two balls later.

With five slips in place and Broad threatening with every ball, Kane Williamson - whose 60 off 167 balls had anchored New Zealand's first innings - had an uncharacteristic rush of blood and drove loosely to Finn at short extra-cover.

There was no let-up from England's new-ball pair as James Anderson had Dean Brownlie caught at first slip before Broad trapped Brendon McCullum leg before for eight to reduce New Zealand to 29-6 and complete a breathless morning session in which 10 wickets fell.

The final four wickets went in less than an hour after lunch. Tim Southee pulled Broad to Joe Root at deep square leg, Watling played through the pain of a knee injury to make 13 before he was caught at first slip off Anderson, and Broad bowled the similarly ailing Bruce Martin.

New Zealand's misery was completed when Wagner was comically run out after a mix-up with Trent Boult after the former was dropped at fine-leg.

Earlier, England offered little resistance when resuming on 180-6, aside from Broad's counter-attacking unbeaten 26.

Southee finished with 6-50 - and 10-108 in the match - to cap an England collapse in which their last eight wickets tumbled for 54 runs.

Night-watchman Steven Finn dangled his bat at Southee's fifth ball of the day and nicked to second slip before Ian Bell, who was ill for much of Saturday, pushed away from his body and was caught by Brownlie at second slip.

Graeme Swann edged a loose drive at Southee and Anderson fell to spinner Kane Williamson when a drive cannoned off silly point and looped to cover.

At that point New Zealand held the initiative, but Broad's devastating new-ball burst provided the decisive twist in a thrilling match.