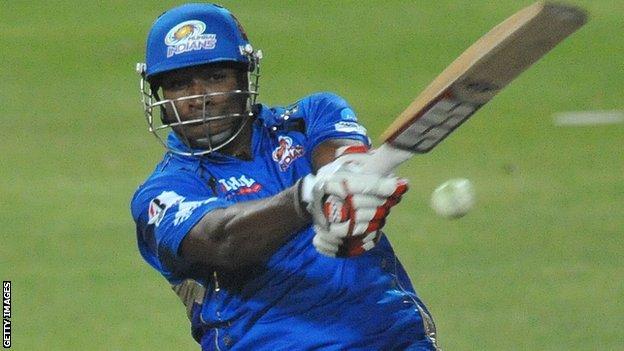 Mumbai batted first and scored 148-9 thanks to West Indian Kieron Pollard's 60 not out off 32 deliveries.

Dwayne Bravo took 4-42 for Chennai, who were aiming for their third IPL success in four years.

But they lost three wickets in the first two overs and fell well short, despite MS Dhoni's 63 not out, as Mumbai won their first title.

Legendary Indian batsman Sachin Tendulkar, left out of the Mumbai side for the final, subsequently announced his retirement from IPL duty.

Mumbai had never reached the final before and opted to bat first after winning the toss, but lost openers Dwayne Smith (four) and Aditya Tare (0) within seven balls.

Ambati Rayudu led the recovery with 37 off 36 deliveries before Pollard's blistering innings, which included three sixes and seven fours.

Chennai, competing in their fifth final in the six years of the tournament, never recovered after a poor start to their innings.

Lasith Malinga dismissed Australian Mike Hussey, the leading run scorer in the competition, and Suresh Raina in the opening over.

Dhoni's unbeaten 63 came off 45 deliveries but it was not enough as Harbhajan Singh (2-14) and Mitchell Johnson (2-19) both took two wickets to help Mumbai win the title.