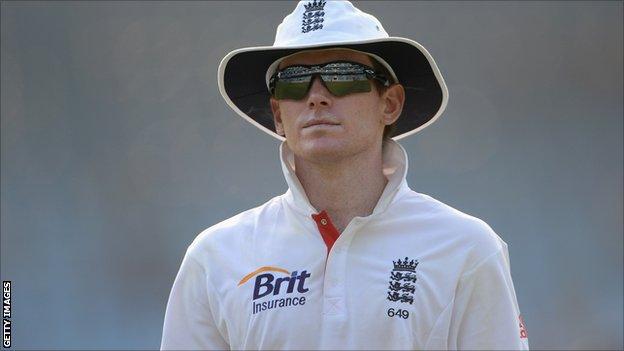 England batsman Eoin Morgan does not believe his stint in the Indian Premier League had a detrimental impact on his chances of a return to Test cricket.

The 26-year-old has played 16 Tests, but none since February last year.

"I'm not particularly sure that the IPL did make a difference", Morgan told BBC Radio Solent.

I was fourth or fifth choice batsman on the winter tour to India, so going to the IPL didn't particularly impact my chances of making the Test side

"I was fourth or fifth choice batsman on the winter tour to India, so going to the IPL didn't particularly impact my chances of making the Test side."

Morgan was selected for the tour to India before Christmas, but did not play in any of the three Tests.

He was subsequently omitted from the squad for the subsequent series in New Zealand and his involvement in the IPL meant he was unavailable for the two recent home Tests against the Kiwis.

Chairman of selectors Geoff Miller recently indicated that the Middlesex left-hander's involvement in the IPL had pushed him down the pecking order for Test selection.

But Morgan said: "It was important to me to go to the IPL and perform, given that T20 is a huge aspect of my game.

"The success that England have had in T20, I've been lucky enough to be a small part of. That has been huge for me."

Morgan remains a key member of the side in both limited-overs formats and is relishing the buzz around the camp ahead of the one-day series against New Zealand, which begins at Lord's on Friday, moves on to the Ageas Bowl on Sunday and concludes with a day-night game at Trent Bridge next Wednesday.

"The guys are in flying form after their superb win in the Headingley Test. We've seen in the past where momentum carries forward from series to series, so hopefully the way the boys performed means they're coming in to the ODIs in high spirits," he said.

Morgan has particularly fond memories of the Ageas Bowl, having scored two hundreds there in 2010.

"They traditionally prepare a very good batting wicket. We saw that last year against the West Indies when Ian Bell hit a magnificent hundred.

"We've had good success in the past few years on the ground, so hopefully we'll have more of the same," he added.