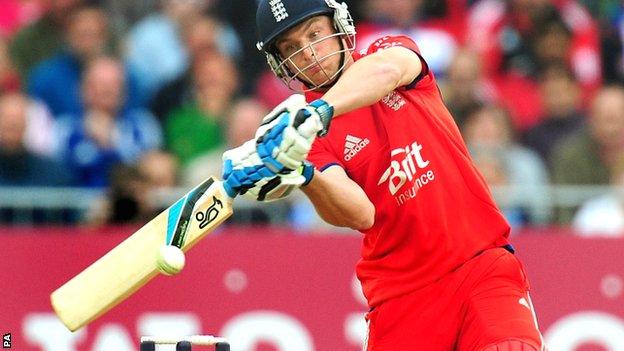 England won by 34 runs in the final one-day international at Trent Bridge as New Zealand claimed the series 2-1.

Ian Bell made 82 but the innings was revitalised by Jos Buttler, who hit three sixes in 47 not out off 16 balls.

James Tredwell (3-51) dislodged Martin Guptill (38), who made unbeaten tons in the first two games, and the Kiwis were 253 all out despite Ross Taylor's 71.

Although the series had already been lost, averting a first home whitewash since 2006 and rectifying deficiencies in all three facets of the game ahead of Saturday's Champions Trophy opener with Australia made this far from a routine dead rubber for England.

Buttler's exploits and a greatly-improved display in the field helped to achieve that but the early exchanges, with the floodlights on from the start in overcast conditions, offered little encouragement.

Only six runs came from the first six overs with Alastair Cook out lbw for a duck. He surprisingly decided to use the only review to challenge the decision by ex-England batsman Tim Robinson, standing in his first ODI.

But, on his former home ground, the official's decision was vindicated as replays showed the ball crashing into leg-stump.

Jonathan Trott's strike-rate as ever was the subject of much scrutiny as he made 37 from 53 balls during a stand of 66 with Warwickshire team-mate Bell before falling lbw playing across the line in the 19th over.

With Joe Root run out for 33 four balls earlier, it left Morgan and the recalled Ravi Bopara, one of four changes in the England team, both on nought in the power-play overs.

Both appeared painfully out of touch, Bopara dropped on three, with only 20 runs accrued in those five overs.

Bopara, who made 28 from 38 balls, was caught on the mid-wicket boundary but Buttler almost surpassed that in six deliveries from seamer Kyle Mills, dispatching a six and four fours.

The Somerset wicketkeeper-batsman's vibrant hitting appeared to inspire Morgan, who launched Mitchell McClenaghan over long-on for six, the left-arm seamer feeling the pressure as 20 came from a 10-ball over, when his first five overs had yielded 2-9.

With a mixture of innovation, extraordinary bat speed and elements of fortune, Buttler, who came to the crease at number seven for the final ball of the 46th over rather than in the 30th over at number six in Sunday's defeat at Southampton, was on the verge of the fastest fifty in ODI history.

The final ball was hooked valiantly but landed short of the ropes and went for two instead of the six required for the record.

New Zealand had Guptill to provide an emphatic response, and after six overs they had amassed 39 with only Luke Ronchi dismissed.

Having made 319 runs without being dismissed in his last three ODI innings, Guptill's golden run continued with ruthless precision, both on the short ball and driving through the off-side.

England badly missed the rested James Anderson and though Stuart Broad was fit to return, he conceded 37 from his opening four overs, while Steven Finn leaked 26 from his first four.

But redoubtable spinner Tredwell, England's highest wicket-taker with 11 in the 3-2 series defeat in India in January, was brought on in the 10th over and claimed the prize scalp with only his fifth delivery as a sharply turning ball squeezed between Guptill's bat and pad as he pushed forward.

Root ousted Kane Williamson for his first ODI wicket, Tim Bresnan dismissed Colin Munro first ball in the next over and Tredwell had skipper Brendon McCullum caught at the wicket cutting to leave the Kiwis 111-5 in the 20th over.

Cook positioned himself in the gully and snared a sharp chance there to dismiss James Franklin off Broad but the threat of Taylor and how England's part-time fifth and sixth bowlers would fare remained.

Taylor swept Root over mid-wicket and into the car park and when Tredwell returned with 67 needed from the final eight overs he hit successive maximums.

He almost made it three in a row but was ninth out as Finn, the tallest man on the field, took a catch on the boundary and pushed the ball to Bresnan before falling over the rope, before the tourists were all out in the 47th over.

The teams will meet again on Sunday week in the Champions Trophy, which begins on Thursday with India against South Africa in Cardiff.