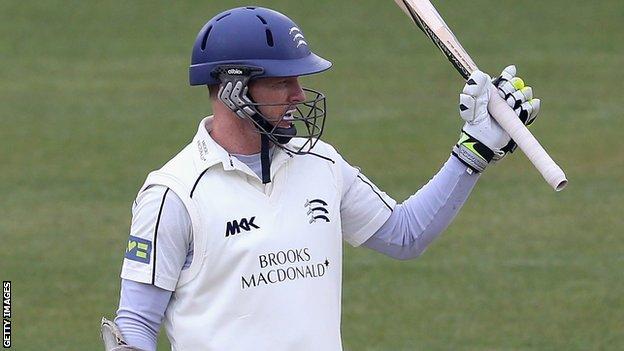 Leaders Sussex paid the penalty for twice dropping Chris Rogers as the Middlesex skipper hit an unbeaten century on day one at Lord's.

The Australian opener had escapes on three and 102 and progressed to 161 not out in a Middlesex score of 320-3.

He put on exactly 100 for the first wicket with Sam Robson, who was then lbw to leg-spinner Will Beer for 54.

A hard-fought contest was in prospect at the start between two unbeaten sides and Rogers and Robson did well to negotiate the new ball against Steve Magoffin and Chris Jordan, who went into the game with 34 wickets each.

It should have been 35 for Magoffin when he found the edge of Rogers' bat, but Michael Yardy was unable to hold the chance at slip.

Robson departed to the final ball before lunch, trapped in front on the back foot, and Sussex enjoyed their best spell in the afternoon as Beer bowled Joe Denly (11) and Chris Nash removed Adam London (18), although the batsman was unhappy with the lbw decision that went against him.

Rogers, however, struck his 12th of 18 fours to bring up his second Championship hundred of the summer and after Jordan put down a diving catch off Beer, he stayed through to the close, having faced 279 balls during the day.

"Despite a greenish tinge to the pitch, Sussex were left to rue the decision to field first after another impressive batting performance from Middlesex.

"Sam Robson added to his list of imperious displays, but fell to the last ball before lunch having just reached a chance-less fifty.

"Neil Dexter also brought up another half-century and has the chance for his first three-figure score of the season.

"The club captain appears to be returning to his best form with the bat, having temporarily passed the role of Championship skipper to Rogers last season for that very reason.

"There is enough in the pitch for the quicks and the spinners, who took all three wickets to fall on day one, but Sussex will reflect that they didn't maintain enough control with the ball after a promising start from Magoffin and Chris Jordan.

"Middlesex's bowlers will have taken note that the threat from the seamers reappeared with the new ball in the evening and will target an aggressive start to the Sussex innings."

"A disappointing day for Sussex who failed to take their chances after winning the toss but, had Mike Yardy held a regulation catch at second slip when Chris Rogers had made just three, the story could have been very different.

"As it was, Rogers took full advantage and Sussex will need early wickets on day two to force their way back into the match.

"Will Beer was the pick of the Sussex bowling, although Jordan and Magoffin bowled well without luck."