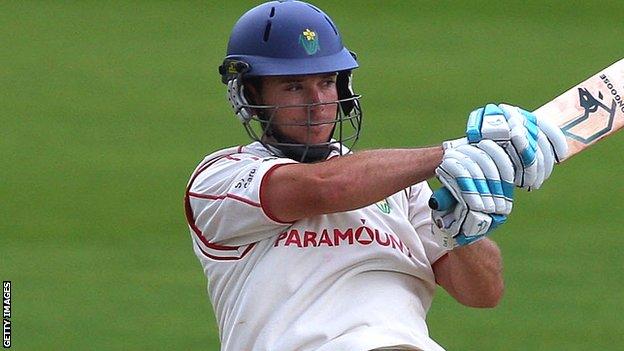 Jim Allenby hit his second century of the season as Glamorgan recovered well on day one against Gloucestershire.

But Allenby made 105, passing 5,000 first-class runs in the process, and shared a fifth-wicket stand of 185 with Murray Goodwin.

The former Zimbabwe international finished the day unbeaten on 96 as Glamorgan closed on 318-5.

Gloucestershire gave a first-class debut to 17-year-old spinner Miles Hammond, who had to be given permission from his school to take part in the game.

The teenager, who took a wicket on his one-day debut against Yorkshire in the YB40 last Sunday, finished with figures of 0-64 from 20 overs on his first day of Championship cricket.

Ben Wright (15) and William Bragg (23) put on 36 for the first wicket for the visitors, but they suffered a collapse either side of lunch after Miles, who had gone for 23 in his first three overs, switched ends and got a wicket immediately.

However, Allenby and Goodwin changed the course of the innings, spending 49.5 overs together before Allenby was trapped lbw by James Fuller.

Goodwin, who has so far hit 12 fours in 212 balls at the crease, then saw Glamorgan to stumps, with Mark Wallace alongside him on 31 not out.

"Michael Klinger may regret putting the visitors in on what looks like a flat track, although his side haven't looked secure when batting first this season.

"Two more wickets for exciting prospect Craig Miles and two for David Payne had put Gloucestershire in a good position just after lunch.

"But Allenby and Goodwin's partnership, just three short of a record fifth-wicket stand for Glamorgan against Gloucestershire, proved difficult to break.

"It was an encouraging first day though for debutant Miles Hammond, who wasn't afraid to use flight and guile against such an experienced batsman as Goodwin."