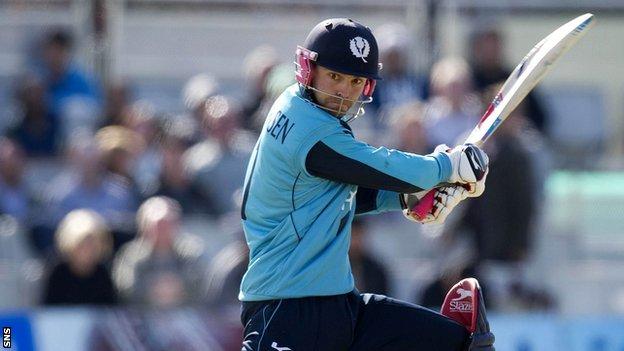 Preston Mommsen has been named Scotland captain for their four-day fixture against Australia at the Grange.

Regular skipper Kyle Coetzer is one of three players missing from the match, which begins on Friday, due to county commitments.

Talismanic bowler Majid Haq also misses out with a hamstring injury, but Richie Berrington returns to the squad.

Only Berrington and Gordon Goudie have made more than 10 first-class appearances in a youthful Scots squad.

"It will be good to have the opportunity to change our focus from 40 over to 4 day cricket against a strong Australia 'A' team," said Scotland coach Pete Steindl.

"We are looking forward to welcoming Iain Wardlaw, Josh Davey and Matt Machan back into the squad, and it will present an opportunity for the players to stake their claim for a spot in the Intercontinental Cup squad against Kenya next month."

For the Australians, the fixture is their first match of their tour of the British Isles, with six of the party also named in the Ashes squad.

"There's guys in the squad preparing for an Ashes tour, and young guys involved in their first experience of an Australian A tour and that's exciting," said Australian captain Brad Haddin.

"But we're all at different stages at the moment.

"Once the games start and we walk over the line against Scotland and Ireland it's all about winning games of cricket."