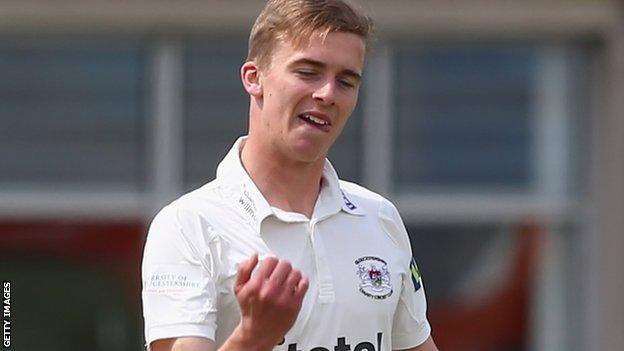 In his next over, Miles dismissed John Glover and Dean Cosker for ducks, before Michael Hogan (51) and Mark Wallace (94) took Glamorgan beyond 400.

In reply, Gareth Roderick made 41 and Michael Klinger (80 not out) and Dan Housego (46 not out) saw out the day.

After Miles had torn through the Glamorgan lower order in his first two overs of the day, dismissing Glover and Cosker in consecutive balls, the home side had looked like they would be batting barely an hour into day two, but Hogan and Wallace had other ideas as 105 was added for the final two wickets.

Number 11 Michael Reed then frustrated the bowlers by occupying the crease for half an hour.

Gloucestershire then made use of the flat track at Bristol to build a strong first-innings base, with openers Klinger and Roderick sharing an opening stand of 79, before the latter was struck plum in front by seamer Hogan.

Klinger scored slowly as he edged towards three figures, although he did deposit Cosker's left-arm spin into the stands on three occasions, alongside hitting eight other boundaries.

Edward Bevan, BBC Radio Wales: "With Gloucestershire still requiring a further 120 runs on the third day to avoid the follow on they will need to accelerate, avoid the follow on, and possibly declare behind and hope for a run chase on the final day.

"The pitch is batsman-friendly, but Glamorgan will hope that it will deteriorate towards the end of the game and give their bowlers an opportunity to force a result.

"John Glover, the Glamorgan opening bowler, will bowl after he dislocated his finger while fielding early in the Gloucestershire innings."