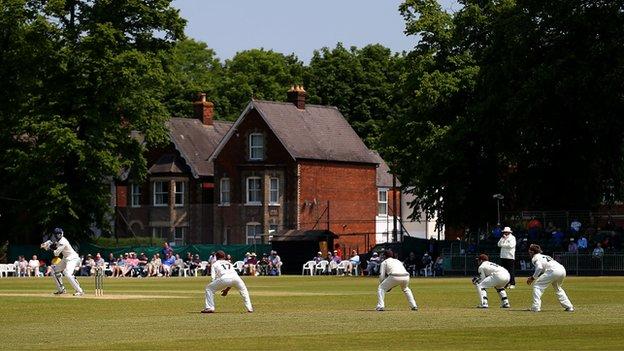 Warwickshire duo Keith Barker and Ateeq Javid both posted career-bests as the bat continued to hold sway on day two against Surrey at Guildford.

Barker hit 125 on his second County Championship appearance of the season, sharing a 211-run seventh-wicket stand with Javid, who made 85.

But Surrey found it just as easy on a docile pitch, closing on 49-0.

After struggling in Wednesday's evening session, going for 30 from his six overs after being released by England, Jade Dernbach made more of an impact on day two.

He bowled a quick spell of 3-16 in eight overs in the morning session to bowl Surrey back into the game at 398-6 - but the Bears tail wagged effectively as they posted their highest total in two years - and the joint eighth best in their history.

England Lions opener Chopra's innings was his 13th first-class hundred - an impressive eight of which have been in excess of 150.

This is the second summer running that Warwickshire have compiled the highest County Championship total of the summer - and each time it has been Surrey who have suffered, having also been on the receiving end of the Bears' 571 all out at Edgbaston last July.

"Bat continues to dominate ball at Guildford as Warwickshire posted their highest-ever total against Surrey.

"Jason Roy picked up three quick wickets as the declaration came from the visitors but there were few alarms for Surrey openers Rory Burns and Arun Harinath.

"Warwickshire often plan for games to run to this script, so they won't be too fazed at this stage by the task of having to take 20 wickets in such good batting conditions.

"It will probably take Surrey until well into Saturday morning to reach the follow-on target, if they do, so there's plenty of time. However, it will take a great deal of hard work to fashion a result, as the pitch appears true.

"Whether it will have something to offer Jeetan Patel's off-spin over the last two days remains to be seen. He's done it before, but at this stage the draw is the favourite."