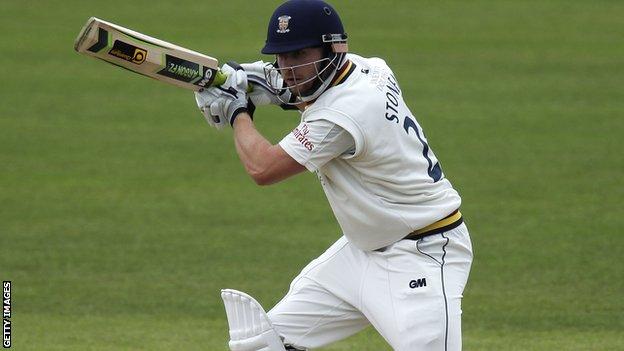 After resuming on 336-5, England's Nick Compton added 27 more before falling for 166 - his best score of the season.

Peter Trego (42) had good support from the tail to take Somerset to 458 all out, while Scott Borthwick took the last two wickets in consecutive balls.

Durham lost Keaton Jennings cheaply, leaving Stoneman and Borthwick to rebuild before the latter fell for 56.

Will Smith was then dismissed by Jamie Overton in the day's final delivery.

Buckley then snatched Trego in his next over and Craig Meschede soon fell to Mark Wood before George Dockrell and Overton added 50 for the ninth wicket to take the total beyond 450.

Durham's batsmen needed to respond but their task was made a lot tougher after Jennings prodded at a full delivery from Overton and James Hildreth took a smart catch at second slip in the 12th over.

Borthwick joined Stoneman at the crease and the pair had shared a stand of 102 when the England all-rounder clipped Dockrell straight to Meschede shortly after reaching his half-century.

Smith had looked like accompanying Stoneman to stumps, but Overton took his second wicket to put Somerset firmly in control.

"There's still a lot of cricket left in this one, but Durham know that, at 163-3, they still have an awful lot to do with the bat to get themselves a foothold.

"Scott Borthwick has taken well to his higher elevation in recent weeks and had made 56 when he popped a simple catch after mistiming a delivery from George Dockrell.

"Mark Stoneman notched his fifth half century of the Championship campaign, but he will be joined by a new partner after Will Smith went to the final delivery of the day.

"Amazingly, having made 166, Nick Compton was the only Somerset player to pass 50."