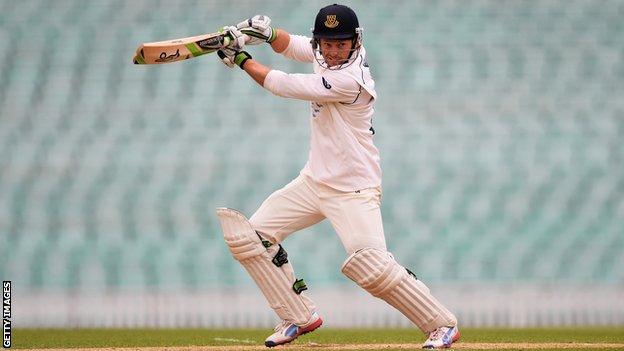 Ed Joyce hit a defiant half-century, but Sussex are still in danger of their first defeat of the season at the hands of his former club Middlesex.

Joyce's unbeaten 75 helped the County Championship leaders to reach 228-4 in their second innings,

It left them 49 adrift of the hosts, who would move above them with victory.

Sussex were earlier asked to follow on after being dismissed for 222, Luke Wright making 77 before falling to Ollie Rayner, who took 5-63.

It was Rayner's first five-wicket haul since joining Middlesex from Sussex two years ago.

Will Beer, who was dropped at slip, played patiently, taking 141 balls to make his best score of the season of 25 in an eighth-wicket partnership of 88 with Wright, before becoming Neil Dexter's second wicket of the campaign from the last ball of an over.

Wright fell to the first ball of the next and the innings finished six overs later.

Sussex made a terrible start to their second innings when Luke Wells fell for a duck to the final ball of Tim Murtagh's opening over, but after that batted with greater resilience.

Chris Nash and Michael Yardy shared a second-wicket stand of 67 before Nash (36) ran himself out and then Yardy (41) miscued a pull shot off the penultimate ball before tea.

Matt Prior was caught by Murtagh off James Harris on the resumption but Joyce and first-innings top scorer Wright (48 not out) enjoyed an unbroken fifth wicket stand of 105 to give Sussex hope.

Wright was given a let-off on 40, however, when he was dropped by Murtagh at deep square leg off Rayner.

"In the third session of the third day, Sussex finally found the fight required in a top-of-the-table clash. Ed Joyce and Like Wright batted with steel and resolve, offering just one chance as the latter was put down by Tim Murtagh in the deep off Ollie Rayner close to stumps.

"Matt Prior was out recklessly just after tea, having hit 18 off 17 deliveries, a dismissal that added to a long list of ill-judged shots and decisions from the Sussex batsmen across both innings.

"Middlesex continued to bowl with control, even when batting became easier against a softer ball on a dusty, but flattening pitch and remain strong favourites to wrap up victory on the final day.

"However, if Sussex can bat for the best part of two of the three sessions that remain, there may be a late sting in the tail for the hosts, who would face a potentially tricky chase on a pitch that has offered some assistance to the spinners throughout."

"An unbroken fifth-wicket partnership of 105 between Ed Joyce and Luke Wright has given the Championship leaders an outside chance of saving this game.

"Joyce led from the front and, with only 49 needed to clear the arrears, the match is far from over.

"Middlesex have dominated from the opening day and, with the new ball available after 17 overs in the morning, will expect to wrap up victory and move back to the top of the table.

"Sussex will, however, have other ideas and we could yet to set for an intriguing final day."