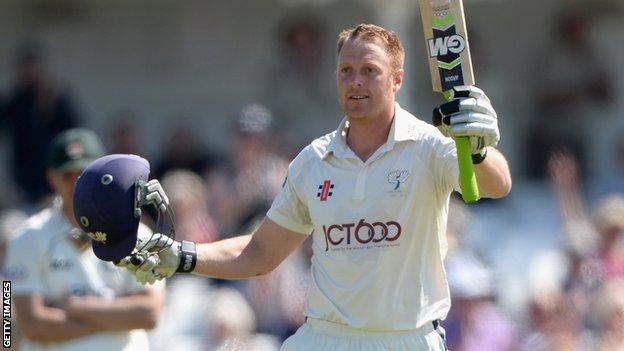 Gale brought up his hundred with a six, making a career-best 159 not out as the Tykes reached 358-4, still 85 behind.

Ballance contributed 103 to an unbroken stand of 237, a fifth-wicket record for the county against Notts.

Phil Jaques was the only batsman dismissed during the day, caught at short leg off Samit Patel for 51.

The home side were in a precarious position when they resumed on 29-3, replying to Nottinghamshire's total of 443.

Gale, however, had hinted at a return to form with two half-centuries earlier in the season and this time capitalised fully, eclipsing his previous career-best, an unbeaten 151, also against Nottinghamshire, at Trent Bridge three summers ago.

Jaques helped add 94, but it was Ballance who provided the main support, offering further evidence of his international potential with a second century of the summer.

It duly arrived, off 207 balls, shortly before the close when he struck Patel for his 14th boundary.

The Notts attack persevered gamely and, if they can prevent Yorkshire scoring 42 off the first two overs on the final morning, will at least have the satisfaction of denying them maximum batting bonus points.

"The heavy roller debate will rage on, whilst we have days like this.

"Terrific batting by Gale and Ballance but, as a contest, it was won hands down by the batsmen, despite the bowlers giving their all on an unresponsive wicket.

"This one's heading for a draw, with little to play for on the final day, bar individual batting milestones."