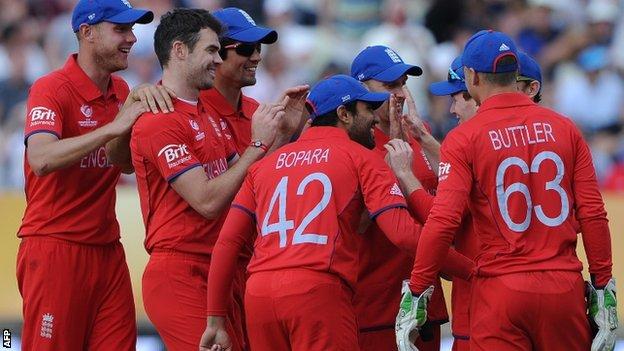 Anderson, level with Darren Gough on 234 before the game, took the wicket of Mitchell Marsh to move past the former Yorkshire seamer's old record.

The Lancashire seamer's record-breaking wicket came in the first ball of his seventh over at Edgbaston.

He went on to take his new record to 237 with two more wickets.

Six others have taken 100 ODIs wickets or more for England, but only Anderson and Gough have broken the 200 barrier.

Anderson is 25th in the all-time world list but has only played 170 internationals.

The 30-year-old became only the fourth England player to take 300 Test wickets when he dismissed New Zealand opener Peter Fulton during the first Test at Lord's in May.

If he is to become England's most successful Test bowler of all time, he will have to overhaul Sir Ian Botham's 383, with Fred Trueman's 307 and Bob Willis's 325 his next targets.

In February of this year, Anderson claimed his 529th scalp in all formats to pass Botham's 528 and become England's leading international wicket-taker.