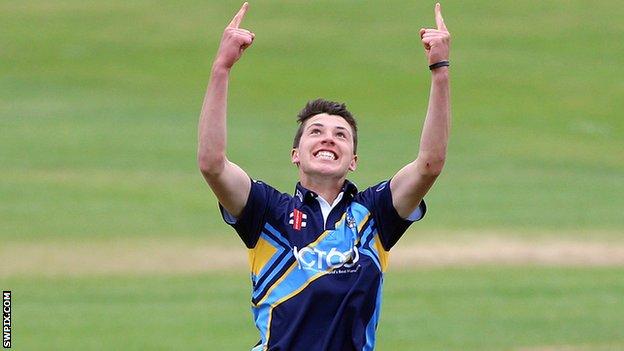 Record-breaking Yorkshire bowler Matthew Fisher admits he is already dreaming of playing cricket for England after making his county debut.

Fisher became the youngest cricketer to play in a competitive county game when he faced Leicestershire in the YB 40 on Sunday, aged 15 years and 212 days.

He took 1-40 in seven overs during Yorkshire's three-wicket defeat.

"Playing professionally for Yorkshire is a massive dream, but the pinnacle would be to play for England," he said.

"But first I want to keep working hard and get more chances for Yorkshire."

Fisher, a Year 10 pupil at Easingwold School in North Yorkshire, was back in the classroom on Monday after being allowed to postpone a GCSE French oral exam because of his cricket commitments.

He added: "Hopefully I can become a regular in the second team and then keep working hard to get back in the squad for the first team.

"Making my debut has inspired me to want to play more professional cricket and hopefully I can reach the first team again. It was such a proud and emotional moment."

Fisher, who beat the previous record held by Glamorgan's Royston Gabe-Jones by 62 days, celebrated taking the wicket of Shiv Thakor by pointing to the sky in tribute to his late father Phil, who died from bowel cancer in July last year aged 53.

"I gave that wicket to my dad," Fisher told BBC Sport.

Congrats to Matthew Fisher... I was playing on my Spectrum 48k at that age...

"He was a great role model for me and a massive influence on my cricket."

"I would honestly say he could go all the way, without a doubt," he said. "You never know with injuries, but playing for England is within his reach."

He thinks the teenager, who attended Leeds United's academy before concentrating solely on cricket, could have forged a career in professional football.

And he believes Fisher will now surpass the cricketing achievements of former Easingwold pupil Nick Thornicroft, who played eight first-class matches for Yorkshire between 2002 and 2007.

"Matthew's an absolutely lovely lad," said Marwood. "You couldn't wish for a nicer lad to teach at school.

"As a cricketer, he's unbelievably good but he is a good all-round sportsman - particularly football.

"Without a doubt, he's comfortably the best cricketer we've had at the school. Nick Thornicroft was good but at this stage Matthew is much better than Nick was."