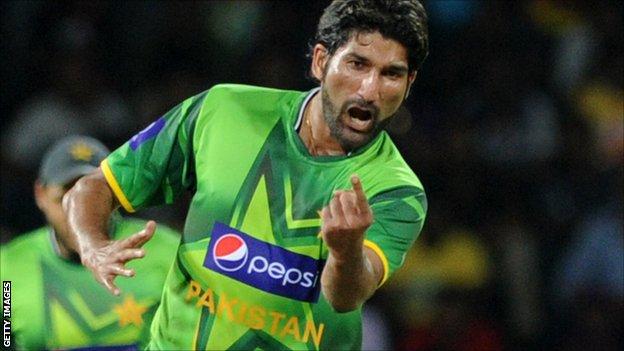 Tanvir, 28, is set to make his debut in Wednesday's Championship game against Gloucestershire at the Rose Bowl.

Two overseas players are allowed in the T20 but with Australian Glenn Maxwell now signing for Surrey, White says no other foreign players will sign.

"We feel we've got balance in the side that is right," White told BBC Solent.

Maxwell was a key member of the side that helped Hampshire to the one-day double, although he did not play on T20 finals day because he had been called up by Australia, but he will play for Surrey.

Hampshire also have South African Neil McKenzie and Zimbabwean Sean Ervine in their squad but the duo do not count as overseas because McKenzie is a 'Kolpak' player and Ervine has an Irish passport.

"We have players who have won us one-day competitions and who have been growing over the past few years," White told BBC Radio Solent.

"They need opportunities. They have won medals over the past couple of years so we are going to give them that opportunity. We will compliment them with Sohail.

"Max was always in our thoughts because he is a fine player but probably doesn't fit our squad right now."

That also means that popular Australian batsman George Bailey will also not return to the club this summer.

The 30-year-old played the first six of Hampshire's County Championship matches with a top score in the 90's, plus a handful of one-day matches, before linking up with the Australia Champions trophy squad.

But with that tournament concluding at the end of the month, and Bailey telling BBC Radio Solent recently he was in talks about the possibility of a return, White says that is unlikely.

"The idea is we stick with what we've got in terms of squad for Twenty20," said White.

"George may come in if we get an injury but our batting order picks itself with players in good form so we felt it was the right decision."

The Pakistan paceman has never played for a county before, although he says he has come close in the past, including with Hampshire..

"But I've never played county cricket. I signed for Hampshire in 2008 but couldn't make it because of visa problems and again in 2009 with Kent and Surrey. Last year I signed for Worcestershire but could not make it so I'm really excited."