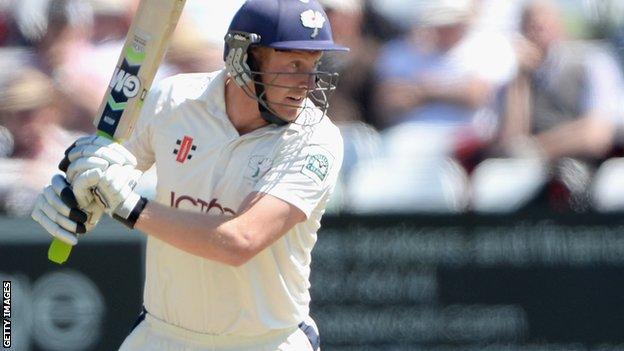 Andrew Gale's 103 helped Yorkshire towards a good first-innings total on the second day at Lord's.

Resuming on 214-2, Middlesex started the better, with James Harris (3-48) dismissing Alex Lees (100) with the first ball of the day before Joe Sayers fell in the following over.

Sam Robson fell to Steven Patterson as Middlesex replied with 16-1 at stumps.

The hosts, knowing early wickets would be vital after Lees and Gale had already built a 145-run third-wicket partnership, got off to the best possible start when Harris, who could only bowl 4.3 overs on the opening day because of a side strain, had Lees caught behind.

Tim Murtagh (3-93) then trapped Sayers lbw cheaply before Rashid, put down by Neil Dexter at first slip, and Gale re-established Yorkshire's control with their fifth-wicket stand.

But Ollie Rayner (3-44) took the prize wicket of Gale, who made 272 against Notts last week, and, with Rashid falling to Harris soon after, Middlesex were able to limit the damage by dismissing the Tykes for less than 400.

Patterson had Robson caught by Adam Lyth for five in the fourth over of their reply before bad light closed in, leaving the hosts 16-1 at the close, still 374 in arrears.

"It was a mixed day, but Yorkshire still hold the stronger position in the match

"With two wickets claimed in the first two overs of the day, and a new ball available after the third, Middlesex had a great chance to take control and may well have done so had Adil Rashid not been dropped on nought at slip by Neil Dexter off Tim Murtagh.

"His partnership with captain Andrew Gale reestablished their side's hold on the game, with the latter producing an outstanding century, in which Middlesex struggled to beat the edge let alone find it.

"The forecast is clear for the final two days and, on a pitch that offers something to both batsmen and bowlers, Middlesex's first priority must be to ensure they do not fall short of the follow-on."

"Yorkshire are on top after day two in conditions more akin to October than June - where did that swirling wind come from?

"Another century from Andrew Gale and 72 from in-form Adil Rashid helped the Tykes 390 all out and three bonus points, but full marks to the home team for a great fightback.

"These two teams battle really hard, but they can do nothing about the weather which is taking large chunks out of the game."