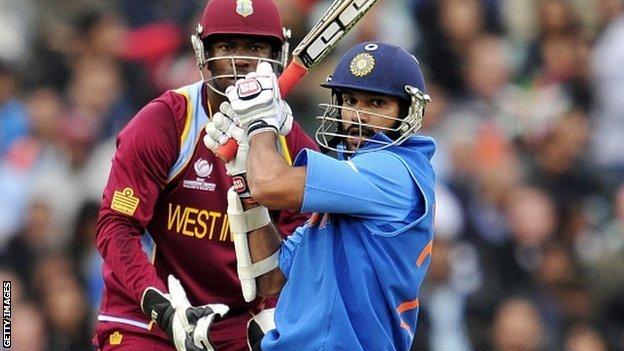 Shikhar Dhawan hit his second century in a row as India crushed West Indies by eight wickets to book their place in the Champions Trophy semi-finals.

Ravindra Jadeja took 5-36 as the Windies were restricted to 233-9 despite Darren Sammy's 56 not out.

Dhawan led the reply with a superb unbeaten 102, bringing up his hundred with a six as India reached their target in just 39.1 overs.

India's victory at The Oval eliminates Pakistan from the tournament.

South Africa and the Windies, meanwhile, will go head to head on Friday for the second semi-final place.

India's commanding win followed on from an equally impressive triumph over the Proteas and established the World Cup holders as early front-runners in a tournament featuring the world's top eight sides.

In Jadeja and Ravinchandran Ashwin, they have two spinners who have exploited dry pitches to excellent effect and in Dhawan and Rohit Sharma, who put on 100 for the second game in succession, they have an opening pair in scintillating form.

India, their board's continued opposition to it notwithstanding, also made shrewd use of the Decision Review System as Jadeja overturned the umpire's original not-out decision to remove Marlon Samuels lbw and Dinesh Karthik successfully referred a dismissal for caught behind before teaming up with Dhawan to ease India home.

"It's one of our most pleasing performances in the last two years," Ashwin told BBC Sport. "We just controlled the game, broke the partnerships at crucial times and the batting performance from Rohit and Shikhar was brilliant."

Recalled to the India one-day side for the tournament after a two-year absence following the fastest debut Test century against Australia in March, Dhawan struck 114 off 94 balls in their opening game against South Africa in Cardiff and produced another batting exhibition here.

The left-hander cut and pulled powerfully and drove anything overpitched down the ground.

He was handed a lifeline when he top-edged a pull shot off Dwayne Bravo on 41 and was dropped by Kemar Roach at fine leg.

"What a way to finish. That is a cakewalk, complete domination from India. Early on in the day West Indies were 103-1, but India were never in any danger. They look a complete side and are now very much firm favourites to win the tournament."

Sharma was almost as fluent at the other end as he breezed to a half-century with seven fours. And it came as a surprise when he fell in tame fashion, caught down the leg side off Sunil Narine.

Virat Kohli looked in sparkling touch before he was bowled by a quicker ball from Narine.

There was no danger of a wobble, however, as Karthik helped Dhawan steer India over the line, a brief rain delay at 204-2 proving little more than an inconvenience.

Dhawan reached three figures with a flourish by lifting Dwayne Bravo over third man for six before Karthik finished the job - and reached his half-century - with a cover drive to the fence in the following over.

The Windies, returning to the scene of their victory over England in the 2004 Champions Trophy final, had made a promising start with the bat - reaching 100-1 inside 20 overs - but faltered badly after the dismissal of Johnson Charles, who was trapped leg before by Jadeja's quicker ball for 60.

Marlon Samuels and Ramnaresh Sarwan followed in quick succession to Jadeja and the innings lost all its momentum as Darren Bravo ground out a painstaking 35 from 83 balls before he was stumped off Ashwin.

Kieron Pollard got off the mark with successive sixes but was soon bogged down by some tight bowling and was caught at long-on off Ishant Sharma for 22.

Narine and Ravi Rampaul offered scant resistance as Jadeja completed his five-wicket haul to seemingly end any chance of the Windies posting a competitive total.

Sammy's late salvo, which spanned 36 balls and featured five fours and four sixes in the last four overs, gave them heart going into the change of innings, only for Dhawan and Sharma's opening offensive to prove decisive.

After defeats in their opening two Group B games, Pakistan will not qualify for the last four even if they beat India at Edgbaston on Saturday.

On the Windies chances of reaching the semi-finals by beating South Africa, captain Dwayne Bravo said: "The destiny is in our own hands. We know it's not going to be an easy game but we have the talent in our group. I'll try to get my guys pumped up for it."