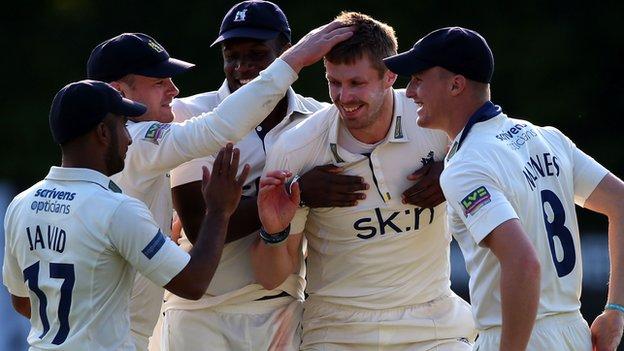 Warwickshire have the rare luxury of not having to make any changes for the first time this season when they take on Durham over four days at Chester-le-Street, starting on Wednesday.

The Bears are unchanged from the side that finished last week's Championship game against Surrey at Guildford.

Tom Milnes started the match in the team, only to make way when Boyd Rankin returned from international duty.

Rankin took 4-43, including a dramatic three-wicket burst on his return.

The former Ireland fast bowler, who had been called up by former Bears coach Ashley Giles as cover for England's Champions Trophy squad, played the final two days of the match at Guildford.

But, with the Bears' injury bulletins proving a lot happier, he is now available for all four days as Warwickshire line up for the first time this season with Rankin and last summer's two leading wicket-takers Chris Wright and Keith Barker in their attack.

Barker made a successful return to action at Guildford after missing the first two months of the season with a side strain, hitting a career-best 125, as well as taking 4-45 to force Surrey to follow on.

This week's return match with Durham, who the Bears comfortably beat by 318 runs at Edgbaston back in April, represents the mid-point of the Championship season and Warwickshire's last four-day cricket for a month.

After the scheduled conclusion of the Durham game on Saturday, Warwickshire will play less than five full days of cricket (two YB40 games against Nottinghamshire and the Netherlands, followed by three FLt20 matches) before they are due to meet Middlesex at Uxbridge on 8 July.