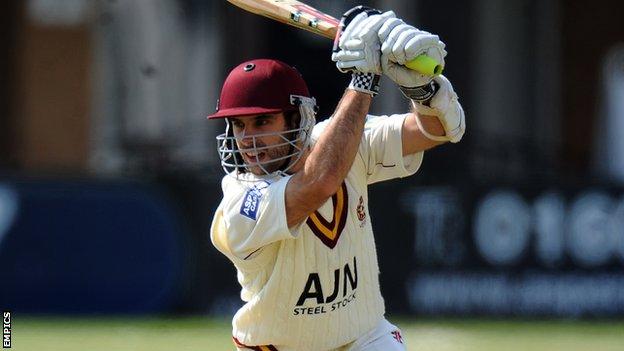 Kyle Coetzer completed the first double century of his career as Northants piled up 567-7 before declaring on day two against Leicestershire.

He made 219, including a six and 36 fours, and added 175 with Andrew Hall, whose 103 was his third Championship century of the summer.

James Middlebrook weighed in with 84 before the declaration, with Alex Wyatt (3-107) the most successful bowler.

Leicestershire struggled to 47-2 before rain washed out the final session.

Niall O'Brien was caught behind down the leg-side off David Willey, registering a duck against his former club, and Greg Smith gave a return catch to Lee Daggett, who was brought into the Northants team following Trent Copeland's return to Australia.

It was exactly the start Northants wanted with the new ball, but Ned Eckersley (19) and Leicestershire's Aussie import Joe Burns (15) prevented further damage before tea and the weather then closed in.

Earlier in the day, Coetzer and Hall spearheaded Northants' attempt to secure maximum batting points, but they came up five runs short on 395-5 at the end of the 110th over.

Once they had both departed, with Coetzer eventually caught behind off Wyatt after batting for 503 minutes, Middlebrook and Steven Crook (47 not out) pressed home the advantage by adding 92 in 15 overs.

"No play after tea at Grace Road left Northants hoping for better weather on day three to allow them to press for what would be a fifth win in eight matches.

"They will be disappointed that they fell five runs short of maximum batting points and nothing but victory will satisfy them over the next two days.

"With rain holding up Hampshire in particular on Wednesday, they will fancy their chances if they can beat the weather themselves."