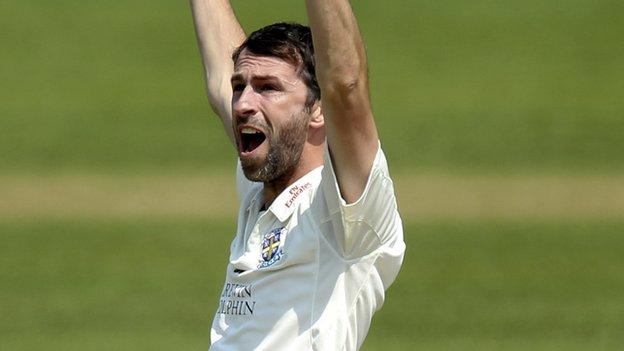 Durham climbed to second in the County Championship as they held off a dogged Warwickshire rearguard to dramatically win by 11 runs inside three days.

After Tim Ambrose's 46, Warwickshire collapsed to 146-7 before a rescue from Jeetan Patel and Ateeq Javid.

But Graham Onions (5-83) claimed both wickets as the Bears fell short on 245.

Earlier in the day at Chester-le-Street, the Durham innings ended in somewhat controversial circumstances, when Richardson hooked Boyd Rankin to the legside boundary.

Javid took the catch, losing his balance as he did so and many in the ground thought he had stepped on the rope, only for Richardson to be given out.

When Warwickshire batted again, Onions saw off Varun Chopra leg before for 18 and William Porterfield for a fourth-ball duck, before the loss of skipper Jim Troughton left the visitors 56-3.

Ambrose gave the visitors hope, putting on 53 for the fifth wicket with Javid, but the former England keeper fell to a fantastic yorker from Ben Stokes.

Warwickshire were 176-7 at tea, still 81 short of the target, after which the eighth-wicket pair offered real hope of snatching victory when they added another 56 after the resumption - to leave them now favourites with 25 still needed.

But, as the tension mounted, Onions claimed both scalps, Javid going for 44 before Patel rashly hooked to long leg on 50.

And, despite legside fours off successive balls from Chris Wright, Stokes trapped Rankin leg before third ball to win it for Durham.

"Those writing Durham off at the start of the season should have a look at the league table tonight. They are second in the table and deserve to be there.

"They didn't bring in any new players in the winter but now have a great balance of youth and experience and, as a team, they have fought hard for all of their four wins so far.

"The run chase at Nottingham in May was dramatic, but perhaps this was more so. For long periods, it looked as if it was going to slip away from them as Ateeq Javid and Jeetan Patel put on 86 and looked likely to steer Warwickshire home.

"However with the partnership broken with 25 still needed, Durham bounced back to continue their hold over Warwickshire on this ground."