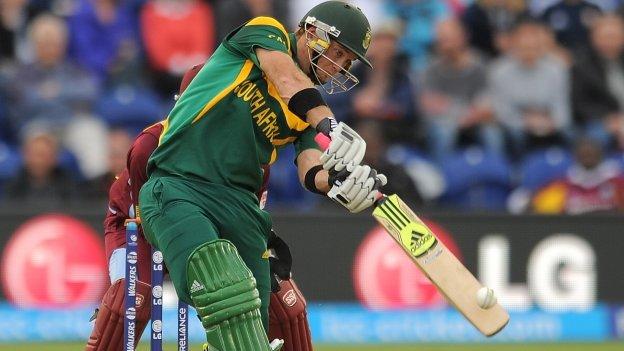 West Indies were eliminated from the Champions Trophy when rain halted their clash against South Africa who reached the semi-finals after a thrilling tie.

West Indies were chasing South Africa's 230-6, from a rain-reduced allocation of 31 overs, and were on Duckworth Lewis par 190-6 off 26.1 overs before the rain came down again.

The teams both finished on three points, but South Africa go through with a better net run rate.

They join India in the last four.

The way the contest finished would have hurt the West Indies after Keiron Pollard (28) and team-mate Marlon Samuels (48) had revived the hopes of their side, who were 104-4, with some brutal batting.

With the threat of rain looming the Windies had matched South Africa's rate by the Duckworth Lewis method.

And they looked set to pass that before umpires Rod Tucker and Steve Davis took the teams off for the final time when the heavens opened again.

Moments earlier, Dale Steyn had taken what could have proved to be the vital catch of the match when he held on to Pollard's lofted effort - the sixth wicket.

The match did not begin until 14:30 BST because of overnight rain and morning drizzle, with the overs' allocations reduced to 31.

South Africa's batsmen readjusted well to what was now required of them. Openers Colin Ingram (73) and Hashim Amla (23) set the tempo, moving the run rate above 6.00 by the 11th over.

Amla played his usual patient role until the 13th over when he tried to smack Samuels through extra cover, but instead found Gayle.

Skipper AB de Villiers, with an average of 64 from nine innings in ODIs in 2013, entered the arena, and along with Ingram, continued to punish the attack, top-edging aggressive paceman Tino Best for six to move to 21 in the 17th over.

But the Windies struck again soon after when Ingram swung too early at Pollard's slower delivery and lofted straight to Darren Bravo at deep midwicket. And they were three down in the next over when JP Duminy fished and missed, gloving Dwayne Bravo to keeper Johnson Charles.

Dangerman De Villiers eventually fell to the catch of the match when Darren Bravo sprung off the ground to snatch the ball.

The contest had swung back in favour of the Windies, but they failed to build on their breakthrough with Pollard and spinner Sunil Narine - both ineffective on the damp, flat wicket - picked off by Faf du Plessis (35) and David Miller (38).

The batsmen both went in the final over, but a 68-partnership helped South Africa achieve a competitive total in difficult conditions.