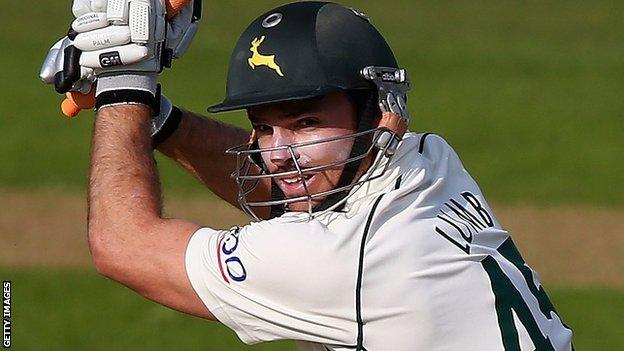 Michael Lumb scored a career-best 221 not out as Nottinghamshire and Derbyshire played out a rain-hit draw.

Lumb, whose previous highest score was 219 for Hampshire against Notts in 2009 at Trent Bridge, batted for six-and-a-half hours, hitting 29 boundaries.

The hosts resumed day four on 204-3 and nightwatchman Luke Fletcher hit a six and eight fours in making 64.

Mark Turner (3-92) took three wickets in the final session but Notts declared on 436-8 to end the game.

Play began on time on the final day and Fletcher frustrated the Division One's basement club for nearly two hours. He was trapped leg before by Wes Durston, but not before hitting Tim Groenewald for four boundaries in five balls.

Rain forced the players off in the afternoon and soon after the resumption Steven Mullaney was caught at slip by Chesney Hughes off Groenewald (3-112) for seven.

Chris Read (21) and Paul Franks, who made only eight, were both bowled by Turner, while Andre Adams (11) holed out to Shivnarine Chanderpaul on the boundary.