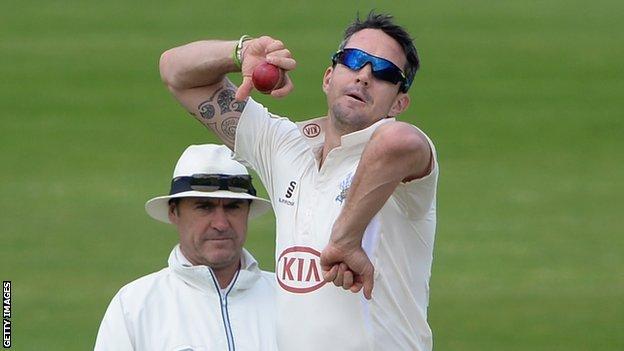 Kevin Pietersen made his long-awaited return from injury with a rare bowling stint and a dropped catch as Yorkshire made 292-5 against his Surrey side.

Pietersen, who has not played since March because of a knee problem, sent down four overs for 13 runs but dropped Andrew Gale when he was on 95.

The Yorkshire left-hander went on to complete his third successive first-class century, finishing 114 not out.

He shared a fourth-wicket stand of 204 with Gary Ballance, who made 90.

Surrey decided to put the County Championship leaders in under grey Headingley skies and bad light forced an early lunch with the hosts on 50-0 from 21 overs.

Adam Lyth (41) edged Chris Tremlett to Vikram Solanki soon after play resumed and in the next over Alex Lees (15) was trapped lbw by Zander de Bruyn with a yorker.

Joe Sayers quickly followed thanks to a slip catch by De Bruyn off Tim Linley and Yorkshire had slipped to 77-3.

Gale and Ballance then took control and dominated the bowlers, who were rotated at regular intervals.

Gale almost missed out on his century when he tried to hit spinner Gary Keedy for a six but a back-pedalling Pietersen could not quite hold on to the ball.

He reached three figures from 137 balls and despite two late wickets for Jon Lewis, Yorkshire ended the day in a strong position.

"The home side had been reduced to 77-3 after lunch with Chris Tremlett, Tim Linley and Zander de Bruyn doing the damage. But Gale and Gary Ballance then combined to rescue the innings.

"Lewis then dismissed Ballance for 90 and Rashid for one but Gale was defiant until the end.

"Kevin Pietersen looked sprightly in the field and bowled four tidy overs of off-spin and got through his first day back in action in good order."