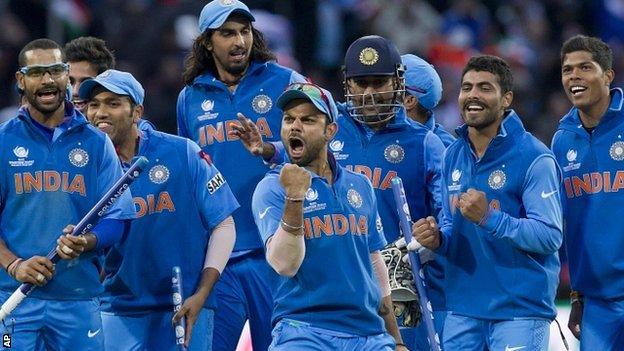 England's search for a global one-day title goes on after they collapsed to a five-run defeat by India in a pulsating Champions Trophy final at Edgbaston.

Chasing a modest 130 in a game reduced to 20 overs per side by rain, the hosts were set for a historic triumph with 20 needed off 16 balls and Eoin Morgan and Ravi Bopara at the crease.

However, Morgan's departure for 33 was the first of four wickets to fall for three runs in eight balls as England were struck by a bout of nerves.

They finished on 124-8 after James Tredwell missed the last ball of the innings with six required for victory.

England are left to reflect on a fifth defeat in a major final - and another agonising loss in the Champions Trophy showpiece after going down to West Indies in 2004 - following the sort of woeful batting display that many thought had been consigned to the past.

A jubilant India, meanwhile, can add the Champions Trophy to the World Cup they won in 2011.

They - and the thousands of India fans among a sell-out crowd - also owe a debt of thanks to the International Cricket Council, which extended the close of play by more than an hour to allow the match to finish at 20:30 BST.

The manner in which England floundered against spin - two batsmen were stumped, albeit one, in Ian Bell, despite replays suggesting otherwise - took the gloss off a fine performance with the ball.

Bopara's 3-20 was therefore in vain, while his dismissal for a punchy 30 - what looked like being the game's most pivotal innings - is likely to be remembered as part of an infamous collapse.

A fifth-wicket stand of 64 between Morgan and Bopara aside, England were rarely comfortable during a pursuit that was undermined when Alastair Cook edged Umesh Yadav to first slip in the second over.

"India have been the team of the tournament and nobody can begrudge them this victory. Thank goodness the close of play time was extended because we had a fantastic game of cricket. It was a remarkable over from Ishant Sharma and it was that which turned the match around."

Jonathan Trott, criticised for his strike-rate in this tournament, batted like he had a point to prove in making 20 off 17 balls, only to over-balance as he attempted to work Ashwin to the on side. Mahendra Dhoni completed a smart stumping off a leg-side wide.

Joe Root swept Ashwin to short fine-leg and Bell was stumped - some replays suggested his foot was grounded - when he dragged his foot out pushing at man of the match Jadeja, leaving England 46-4.

Bopara hit two huge leg-side sixes and Morgan one as they restored the balance of power, but the game changed in one remarkable over from the wayward Ishant Sharma.

He bowled two successive wides before Morgan, swiping across the line, found mid-wicket off a slower ball, and when Bopara pulled the next delivery to backward square-leg, England were reeling.

As if to illustrate the panic that had infested the dressing room, Jos Buttler was bowled first ball aiming an unsightly heave at Jadeja, then Tim Bresnan was run out after he went in search of an impossible single to point.

England's precipitous slide put the contributions of Virat Kohli, who made 43, and Jadeja into greater context, on a pitch that turned more as the evening progressed.

They helped repair a scorecard that read 66-5 after the loss of Suresh Raina and Dhoni in the space of five balls, with Jadeja leading a late assault that brought 33 - ultimately crucial - runs off the last three overs.

England had to wait almost six hours to capitalise on overcast conditions thatwere little different from when they won the toss.

However, Stuart Broad struck in the fourth over when he nipped one back to beat Rohit Sharma's drive.

The scalp of Shikhar Dhawan, the tournament's leading run-scorer, was more highly prized, not least because he uppercut Broad for six and took successive fours off Tredwell before he drove a Bopara slower ball to short extra-cover to depart for 31.

Dinesh Karthik top-edged a sweep off Tredwell to short fine-leg, the first of three wickets to fall for two runs in 12 balls as Bopara had Raina taken at mid-on courtesy of a mistimed drive and Dhoni cut to third man.

Cue Kohli's counter-attack, which emboldened Jadeja and featured a mighty pulled six off Broad moments after he was dropped above his head by Trott at short third man.

Although Kohli lifted James Anderson to Bopara at long-off in the penultimate over and Ashwin was run out by Bell's direct hit, India's late wobble was nothing compared to England's.