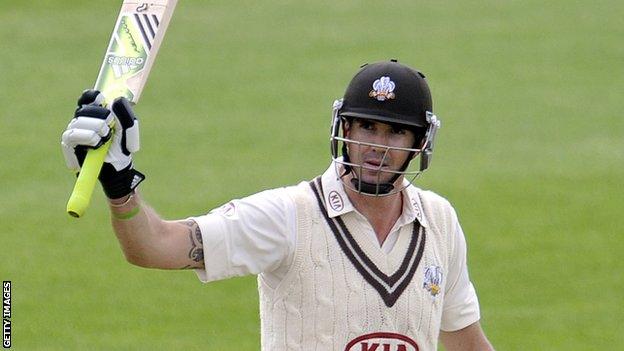 England batsman Kevin Pietersen made a seamless return from a knee injury with an unbeaten 177 for Surrey against Yorkshire on day three at Headingley.

Pietersen hit 17 fours and seven sixes during his 48th first-class hundred - reached from just 106 balls - in his maiden knock of the season.

Adil Rashid missed a sharp chance with Pietersen on 78 while he was also dropped off the last ball before tea.

Alex Lees was trapped lbw to Gary Keedy for 13 but the home side managed to negotiate the tricky 21 overs at the end of the day.

When he bats like that there's no other player in the world that can play like him. It was great to watch

Surrey had begun the day on the back foot at 53-1 in reply to Yorkshire's 433-9 declared and slipped to 76-4 before Pietersen, with Zander de Bruyn (38) and Steve Davies (44), began the turnaround.

Following tea he unveiled some huge shots including the signature switch hit and looked in fine touch during the 188-ball innings before Surrey made their bold declaration.

And Pietersen, playing his first game since the drawn second Test against New Zealand in Wellington in March, left the field having rescued Surrey's innings while simultaneously sending out a huge warning to Australia ahead of the Ashes.

"He may not have played any type of cricket since March but he's worked incredibly hard and he's gone out and played a fine innings.

"When he bats like that there's no other player in the world that can play like him. It was great to watch.

"He's now fielded for a day and a half, he's batted for the best part of a day, he's run his quick singles, his twos and his threes. Yes, he's hit the ball over the boundary and beyond, so it's been a really good workout for him."

"'I have been here two days waiting for this.' The words of a scribe in the Headingley press box. The wait was worth it as Kevin Pietersen returned to cricket in style.

"He crashed seven sixes and 17 fours in a magnificent 177 not out to restore Surrey fortunes in this match.

"The Pietersen master class allowed Surrey to declare 80 behind Yorkshire in the first innings. Yorkshire now have a lead of 132 going into the final day after reaching 52-1 in their second visit to the crease.

"We could be in for an exciting finish, but Yorkshire, the league leaders, may not be too bold in any declaration as they are a bowler light due to Steve Patterson sustaining a broken toe in this game."